Many technical inventions are long forgotten and outdated. Then there are important technical inventions where the basic idea survives for generations and is still universally accepted today. Such an invention for the brick industry was made in 1910 in the machine factory C. Keller & Co Laggenbeck. The fully automatic brick handling machine “Type Hörstel“ designed at that time by the engineer Joseph Keller auto­matically transferred cut/shaped bricks to pallets, ready to be forwarded into drying installations. In 1910, this fully automatic brick handling machine was field-tested in the Hörstel brick factory (hence its name) and marvelled at by experts at a construction exhibition in Berlin in 1910. The fully automatic brick handling machine was a decisive step forward towards further ­development and process automation in brick factories and in other related ceramic production plants.

Thus the fully automatic brick handling machine “Type Hörstel“ was the beginning of automatic brick handling and it was no longer necessary to take up each brick and to transfer it manually. The carrying laths (pallets) were introduced into the automatic machine first via an inclined feeding system and later laterally, and a sophisticated mechanism grouped the cut bricks smoothly, separated them and transferred them to pallets. Some time later followed the development of an automatic pallet circulation system with dryer loading and unloading facilities. At the beginning of the 1960s kiln car loading and unloading systems with setting installations and dehacking and packing machines were developed, thus guaranteeing automatic operation from the clay pit to the packing station.

The engineer Joseph Keller, the son of Carl Keller senior, (who as inventor of the dryer finger car in 1894 was already a “revolutionary in brick drying“ and founder of the company C. Keller & Co.), designed several technical and technological novelties for cutting, hand­ling and process engineering installations in addition to the “anniversary fully ­automatic brick handling machine“.

With their inventive talent and entrepreneurial spirit, the “Keller pioneers“ had already discovered basic elements for an automatic brick production at an early stage. This engineering tradition of developing innovative machines and plants has been continued by Keller HCW ever since. For some years robots have perfected the automatic processes in certain areas of brick, roof tile and ceramic tile factories. Innovative brick factories, such as the Heluz plant in Hevlin (Czech Republic) or Röben in Bannberscheid (Germany) are examples of these engineering skills. You will find further information on this topic on www.zi-online.de (Special “Robot handling”). 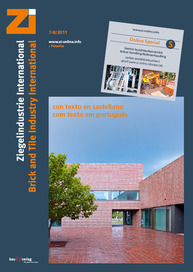 Keller  Successful in Russia for 100 years

Keller has supplied plants and machinery worldwide for 125 years

In 2019, Keller looks back on a successful company history of 125 years. Keller, the German manufacturer of machinery and plants in Laggenbeck, is one of the most important companies in Ibbenbueren....

Grinding of fired common bricks has well-established in Europe. The firms Keller HCW and novoceric Transportanlagen both have already delivered more than 60 surface grinding machines. With this...

From October, our website www.zi-online.info is starting a new section headed Special. Under this heading, plant engineering companies and suppliers to the clay brick and tile industry will...