At this year’s Tecnargilla, Claytech, a special section dedicated to technology for the clay brick and tile industry, will present the world’s leading companies in the sector for the fifth time.

In 2010, the trade fair reported over 31 000 visitors, 14 603 of them from abroad. According to a survey conducted by an independent market research firm among visitors to Claytech 2010, 74% of brick manufacturers had a positive impression of the section overall, expressing satisfaction with the number of international exhibitors. 92% of trade visitors who visited the Claytech section in 2010 said they would recommend it to others in the sector. At the beginning of the year 2012, over half of the spaces occupied in 2010 have already been rebooked.

Claytech 2012: special features of the programme

Preparations are also heating up for the events and initiatives dedicated to brick that are organized before and during the expo to offer exhibitors and visitors new opportunities to meet up. In addition to the usual initiatives at the fair, which include conferences focused on key issues for the sector and a technology transfer programme, in the weeks ahead Tecnargilla 2012 will be sending Claytech exhibitors and visitors a periodic e-newsletter. Moreover, contacts have been made with various national associations of brick manufacturers, trade institutions, and chambers of commerce to ensure attendance by carefully selected, highly qualified buyers and other key figures, who will take part in conferences during the fair.
This article appeared in 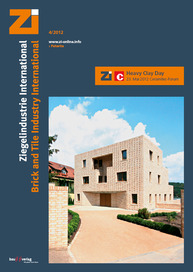 At the 22nd Tecnargilla, Claytech, an exclusive section for the suppliers of machinery and equipment to the clay brick and roofing tile industry, will be presented for the fourth time in...

Tecnargilla, one of the worlds leading trade fairs for the ceramics industry will be held in 2012, from 24 to 28 September in Rimini. At the trade fair, organized as always by Acimac and Rimini...

According to a report from Tecnargilla, the leading international trade fair for technologies for the whitewares and clay brick and tile industry held from 22 to 26 September 2014, the event welcomed...

Tecnargilla 2014  the future of ceramics

Tecnargilla  the innovations trade fair is back

The 24th Tecnargilla, one of the worlds leading fair for applied technology in the ceramics and brick and tile industry, will take place from 22 to 26 September 2014. Organized by Rimini Fiera in...