The Italian manufacturers of ceramic machinery and equipment reported 26.2-% growth in turnover for 2011. According to a survey conducted by Acimac, the sector generated a turnover of € 1.738 bill., recovering 94% of the losses suffered since 2009. This excellent performance has put the sector ahead of all Italian capital goods manufacturers.

The recovery was driven primarily by exports, which accounted for 79.8% of turnover. The sector’s level of internationalization is also increasing. In 2011 there were a total of 53 companies majority-owned by Italian groups (share greater than 51%) operating outside ­Italy. These companies generated a turnover of € 550 mill. Adding these volumes to the total turnover generated in Italy, the sector reported an all-time record turnover of € 2.297 bill. The Italian market also showed an initial recovery, closing 2011 with 9.2-% growth.

The number of companies also continued to fall, although the average company size is gradually increasing. The number of employees rose to 6 343.

For 2012, Acimac is cautious owing to a slowdown in growth in almost all the world’s economies, even in India and China, as the outgoing chairman Pietro Cassani stressed. Initial estimates for 2012 suggest that the turnover levels reached at the end of 2011 could be maintained.

In 2011 the sector’s ­Italian companies consolidated their shares of international markets.

At the end of 2011 there were 150 companies operating in the ceramic machinery and equipment manufacturing sector in Italy, (2010:157). The largest contraction (-11 companies) was in the category of small enterprises (turnover below € 2.5 mill.). By contrast, companies with turn­over in excess of € 10 mill. increased by 3 to reach a total of 19 companies.

The number of employees rose by 115, to 6 343. The number of executives and company owners fell by 27, while the number of technical and production professionals rose by 141. The profitability per employee rose in step with growth in company size.

The shares of turnover generated by the various types of machines remained fairly stable in 2011 as they reflect the importance of these machines within the ceramic production process.

Most types of machines generated exceptional turnover increases. Firing and shaping machines grew respectively by 58.9% and 21.7%, drying machines by 33.7%, storage and handling machines by 25.2%, and raw materials preparation machines by 18.1%. The turnover generated by the sale of classification systems almost doubled, up by 87.1%.

Other types of machines showed smaller increases, particularly moulds with just 8.2% owing to their strong dependence on the Italian market, which contracted by 4.7% for this product type.

The only type of machine to experience a fall in turn­over was that of quality and process control machines, which experienced a 72-% contraction (although following the boom of 2010 this figure is no cause for alarm).

The breakdown of turnover by client sectors remains similar to that of previous years.

Turnover generated by sales to the second largest client sector, that of brick and tile producers, remained virtually stable, with a turnover of € 135.7 mill., 7.8% of total turnover, almost all of which was generated by exports (86.1%). These rose by 12.1%, compensating for the sharp fall in the domestic Italian market (- 32.2%).

Machinery for the production of refractories totalled a turnover of € 51.9 mill., while the tableware and ornamental ware machinery sectors (€ 27.4 mill.) experienced 62.5-% growth in exports and a 66-% fall in Italian sales. 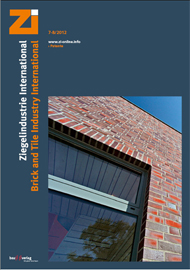 Following strong growth in turnover in 2011 (+26.2%) to return to pre-crisis levels, the Italian manufacturers of machinery and equipment for ceramics experienced a slight decline last year. Sales...

Sales record in 2016 for the Italian ceramic machinery suppliers

The Italian ceramic machinery sector continues to have the wind in its sails, closing 2016 with record sales of  2.028 bill. euros (+2.3?%). These results were driven by excellent performances both...

The Italian manufacturers of machinery and equipment for the ceramics industry have achieved a record turnover. According to the National Statistical Survey conducted by Acimac, the sectors turnover...

After five years of growth culminating in the record results achieved in 2017, the total revenues generated by the Italian manufacturers of machinery and equipment for the ceramic and heavy clay...