Röben Managing Director Wilhelm-Renke Röben has expressed great satisfaction with the past business year (1 July 2015  to 30 June 2016). Highlight of the last year was the opening of the latest plant for the Röben Group in May this year: Clay County in Henrietta in the US-State of Texas is the fifth plant in the USA. In the new plant, around 100 mill. bricks can be produced per year.

The focus of the Röben Group will remain Germany. In the past business year, Röben has invested in its seven German production plants. For instance, in the Bannberscheid plant in the Westerwald, a new unloading plant has been installed, the fine stoneware plant Schweinebrück/Friesland has been given a new digital printer in order to offer the customer even more creative surfaces.

Since 1995, with a brickworks and two large roofing tile factories, Röben has held strong foothold in Poland. From the plants in Neumarkt, the entire East European region is supplied. 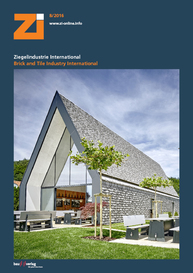 Röben Tonbaustoffe GmbH has invested heavily in their thermal brick plant located in Reetz, Brandenburg. They installed a new filling station that custom-fits blocks of mineral wool into the air...