Wienerberger Österreich GmbH operates a total of eight production facilities in Austria for the manufacture of bricks and roofing tiles. In December 2019, one of the first high-temperature heat pumps in a European industrial environment was put into demo operation at the Uttendorf site in Upper Austria.

Waste heat from industrial processes has so far mostly been released unused into the environment. Within the framework of the EU project DryFiciency, this specific heat pump technology has been developed over the last three years under the leadership of the Austrian Institute of Technology (AIT) and a demonstrator has been integrated into the drying process.

The DryFiciency development project sets a milestone in the direction of decarbonization in the brick industry and is a prime example of how innovations from research can be quickly brought to market. DryFiciency shows that heat pump technology can also be used for industrial processes in the high temperature range.

The overall objective of the DryFiciency project is to develop technically and economically viable solutions for reducing primary energy demand and CO2 emissions by recovering energy from waste heat streams.

At the Uttendorf plant, the new heat pump heats a section of the tunnel dryer. In the first four weeks after commissioning, it was possible to operate in all the temperature ranges envisaged, up to the targeted maximum temperature of 160 °C.

In the course of the DryFiciency project, two industrial high-temperature heat pump systems for waste heat utilization are being developed. They have the potential to save up to 80% of the energy consumption and the corresponding CO2 emissions in industrial drying processes and thus significantly reduce production costs.

A second high-temperature heat pump from the DryFiciency project is being used by consortium partner Agrana. Compared to the Wienerberger heat pump, which works with piston compressors, the heat pump at Agrana is implemented with screw compressors. This configuration is more efficient when a large operating range is covered. It also offers advantages in terms of start-up behaviour and approval due to the lower refrigerant charge per circuit.

A second high-temperature compression heat pump will start operation at another Wienerberger site during the next two years and will then be measured for roughly two years. 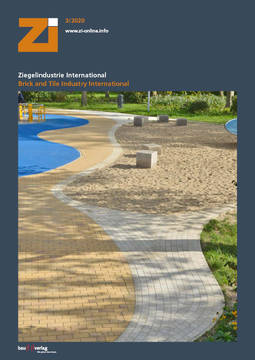 Use of heat pumps in brick drying

For a brickworks with a production rate of 400 tonnes per day fired ware, the mixing water content of around 20 mass% necessary for pressing means that every day around 80 t water must be expelled...

Adolf Gottfried Tonwerke GmbH and the cleantech company Orcan Energy have been presented with the Energy Efficiency Award for their innovative project for waste heat utilization in the...

Around the world, some 50% of all process energy is expelled unused as waste heat. It is therefore extremely important that ways be found to make better use of such off-heat from production processes....

On 25/26 June, the Czech Silicate Society is staging Hitherm Prague 2013, the international conference on high-temperature processes. Key themes include energy efficiency and heat recovery in...

In a joint research project, the Gas- und Wärme-Institut Essen e. V. (GWI) and the OWI Oel-Waerme-Institut (OWI) have designed, manufactured and tested a combined biofuel burner for the generation of...