The August Allebéplein public plaza is distinctive feature of the Slotervaart district of Amsterdam, which is currently undergoing urban renewal. One project was the building of “Het Meervoud”’, a primary school for children up to the age of 14 years. Besides the school, this facility accommodates a wide range of social, cultural and community activities. As very many immigrants from Tunisia and Morocco live in this district, the architect Marlies Rohmer not only wanted to create a design that would harmonize with the urban surroundings, but that would also integrate the identity of the local population. Using prefabricated clay brick panels, she realized a functional but ornamented architecture. This unites architectural features from the home countries of the immigrants with modern, European construction engineering. Marlies Rohmer has created something new for the local residents that nevertheless reminds them of their home countries.
This article appeared in 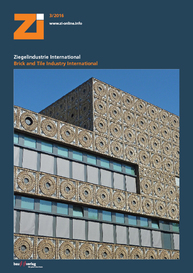 In Medina Sidonia, near Cádiz, in the south of Spain, a former slaughterhouse was converted into a professional cooking school. New clay roof tiles mirror the roof tiling method of the historic city,...

To connect the community of Loddin and the district of Stubbenfelde with a promenade on Lake Kölpin in Mecklenburg-Western Pomerania, the commissioned landscape architecture firm of Niessen from...

The international port was the beating heart of Bremens economy for more than 100 years  until the end of port operations in the 1990s. Instead, the Überseestadt district, one of the biggest...