At the general meeting of Andil, the Italian brick association, on 7 July in Rome, the focus was on earthquake protection and reconstruction with clay bricks in Central Italy.

During the event, innovative systems developed in the scope of the European research project INSYSME were presented for masonry. These special engineering solutions were designed to increase the safety of the buildings in earthquake-risk regions as well as to demonstrate improved performance regarding a healthy indoor climate, thermal insulation, sound protection, damp protection, fire safety and durability. In the subsequent discussion, experts, key players in the development of the plan for the reconstruction of Central Italy as well as representatives from the construction sector took part. Before the conference, the general meeting of the Italian industrial association Federazione Confindustria Ceramica e Laterizi was held. Highlights included an interview with the Paraguayan architect Solano Benitez, winner of the Golden Lion of the Venice Biennale and world famous for his use of clay bricks in creative, innovative architecture that is affordable for everyone.

At the Andil annual general meeting, the existing Board with President Di Carlantonio and the board members Atila, Briziarelli, Cunial, Cuogo and Danesi were unanimously confirmed in office for another two years. The balance of the Brick Association showed a shortfall as in the previous year.

This year’s  general meeting took place against the background of the planned merger of the Andil Brick Association with the ceramic association Confindustria Ceramica. Goal of the merger is to gain a better presence in political activities. Andil currently has 68 members.

Since 1985, the Italian Brick Association has systematically recorded the production figures. A crisis like the one the sector has experienced since 2007 has never been known before. »3 shows the development of the production levels in past years and an outlook up to 2020. The very low increases expected for production are influenced by the continued politically instability and generally dissatisfying economic situation and particularly that of the property sector in Italy. The prices for brick products attainable on the market are still not high enough to obtain a positive overall result. In most cases, the EBITDAs are not negative.

The hoped-for improvement in the market situation has not materialized. In view of the rather poor economic outlook for Italy for the forthcoming years, the market will stabilize at the current low level. 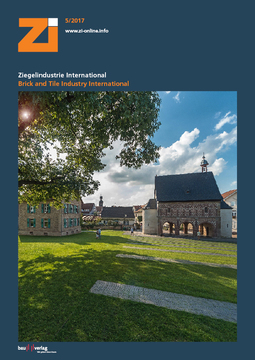 Key topic at this years meeting was Building in regions at risk of earthquakes. CRESME (Italian Building Institute) gave an interesting report on this. Other reports on this subject were...

At the Ecomondo trade fair in Rimini in November 2014, Andil, the Italian Brickmakers Association, together with Syneco, an energy service company based in the South Tyrol, was presented with an award...

In 2014, Andil, the Italian tile and brick association, is organizing the TBE annual meeting parallel to its own general assembly. The annual meetings fall at an important juncture as Italy will be...

Under this motto, this years annual meeting of Andil, Associazione Nazionale Industriali del Laterizio, was held on 16/17 June in Milan, where the Italian Brick and Tile Association was established...

No uniform trend in the Italian clay brick and tile industry

This year, the members of the Italian Brick Association Andil gathered for the Associations annual meeting in Catania on 10 June. This Sicilian city, on the foothills of Mount Etna, has a rich...