In a gap in the fabric of Schwerin’s old town, the firm planstudio9 has built an unusual residential and commercial building. The sensitively integrated clinker brick building is replacing a one-floor flat roof building and, with its differentiated stepping and its three- and five-floor design, mediates skilfully between a two-floor Baroque building and a five-floor brick building from the 1930s The formation of the gable as a “façade” with corner windows formally completes the row of buildings in Schlossstrasse.

A slightly horizontal twist of the indivdual floors makes the building even more exciting. After an intensive examination of the history of the location, a differentiated, extremely three-dimensional spatial sculpture with varying building lines was created, which fits into its environment in spite of all its modernity. “The appearance of the side facing the street blends into its environment in terms of its scale and the materials used. However, its architecture and design mean that it can be identified as an expression of the times at the same time,” explains the architect Michael Schnell.

The new build’s façade was erected as double-shell brickwork with a rear-ventilated inside insulation. The planners paid great attention to the choice of a suitable clinker brick for the outer shell. To enable a harmonious transition to the brownish red brick façade of the neighbouring building, the Röben clinker brick Rysum flame-variegated was used. With their light and friendly look and the cream-coloured grouting, the standard-format bricks emphasise the high-quality character of the architecture and, at the same time, go well with the aluminium frame and the bluish green glass panel and structural elements of the windows.

The planners achieved an extra three-dimensional effect by bringing individual windows forward. The result is an outer shell with a nap-like structure, which emphasises the three dimensional design of the architecture in a modern way and, at the same time, creates a harmonious connection to the neighbouring brick façade from the 1930s. 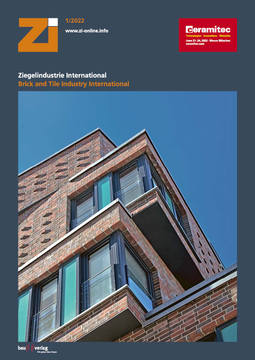 Life on the waterside: Westgarten

The six-storey corner building in the new Westgarten part of FrankfurtMain links the new Westhafen (West Harbour) and the Gutleut quarters of the city. On the ground floor are a supermarket and some...

Here you can find reports on brick-built properties... Facade ? Clay brick linking the old and the new ? Red-blue multi-mix bricks from A K A define the appearance of the BUG multi-storey building...

The K House is part of a historical ensemble of freestanding villas bordering the English Garden in Munich.The house contains a generously sized apartment over two storeys for the owners and their...

Pavement going up the walls

The path to the front door leads over a refreshingly colourful, varied clinker pavement - and if youre not careful, you could easily walk up the wall: Using a 50-year-old brick building as a base,...