In the manufacture of brick and roofing tiles, today usually on highly automated production lines, besides dust and ceramic breakage, the prevailing temperatures present a particular challenge for the materials handling and conveying systems used.

Here the material handling systems from the intralogistics specialist Herrmann + Hieber, which have been designed for rough and tough of the metals industry, have proven effective. H+H is a medium-sized specialist in heavy-duty material handling and conveying systems, automatic cranes, special storage systems as well as coil handling or packaging technology for long products for a range of industries in metal production and metal processing industry. The systems developed by the Denkendorf-based company have proven efficient in these harsh conditions for decades and enjoy a good reputation. When the company received an enquiry for a customized solution for a Southern German brick plant, it took on this new challenge.

The new system replaces two aging automatic material handling systems for the transport of green bricks from the extruder to the dryer and then onto the kiln.

“Modern brick plants are extensively automated and consist of a series of central stations linked by material handling and storage systems that do not require any personnel for operation”, explains Walter Pfeuffer, H+H-sales representative and an insider in the brick and tile industry. The corresponding transport equipment is exposed to high loads and must be robust enough to function day after day, often in more than one shift, without failure so as to avoid any downtime, also upstream and downstream in the production line.

In the concrete case, there are two conveying lines with the help of which the green brick carriers are separated and further transported to the unloading station. The green bricks are lined up on tubular steel pallets, the loaded pallets placed on the dryer car and then the bricks are dried. After drying, the pallets are unloaded individually from the dryer car to channel them one after another through the plant. In the transport rack, the brick carriers are supported on rails mounted at the side of the rack. An automatic unloading system takes the carriers off one after another and places them on a double belt conveyor supplied by H+H. The take-off starts with a lifting motion, then the bricks are moved to the side while the unloading equipment picks up the next pallet. After the first transfer operation, a transfer trolley driven by another belt conveyor supplied by H+H takes over the fast further transport to the unloading station. There, rows of the green bricks are gripped by the depalletizer, and moved to the side, ready for the next stage in the process. The second station arranged downstream of the dryer then handles the pallets coming from the dryer. The green bricks are unloaded and then conveyed to the kiln entrance zone.

The customer specifications included high dynamics of the handling equipment. This calls for high acceleration and deceleration of the green brick carriers between the consecutive unloading cycles during depalletization of the rows of brick. To this end, the belt conveyors were equipped with asynchronous servomotors supplied by SEW. These have integrated position sensors, the signals from which are evaluated in the control cabinets for drive control. The perfect synchronization with the other processes in the unloading zone thus achieved ensures short cycle times.

“The customer attached particular importance to robustness and reliability”, explained Walter Pfeuffer. With the original chain conveyor system, the maintenance requirements had increased drastically with its advancing age. Important aspect in the decision for the H+H system was the good reputation its logistics solutions had acquired during decades of operation in sometimes extremely harsh conditions in the steel and metals industry. Another advantage is the simple design of the equipment, meaning it can be maintained and repaired by the plant’s own maintenance team, which limits downtime and costs. To meet the customer’s need for safety, extra-large 100-mm conveyor belts were included in the quotation. “Yet our quotation was still so reasonably priced that the customer ultimately opted for our system”, says Walter Pfeuffer with delight. 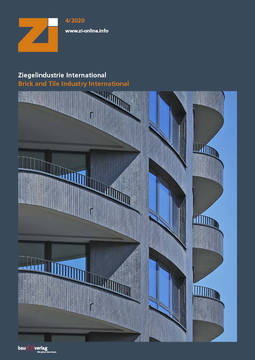 In March 2016, the first deliveries for the Zozik Brick Plant project were sent on their way. The first 32 trailers arrived on site in Erbil where site operations for plant construction are...

Sabo S.A., the Greek plant engineering company, continues to extend its geographical reach and is entering the Belarus market with its first project. The company held out against its competitors and...

On 17 November 2015, the new Ekoklinker facing and paver bricks plant in Novocheboksarsk (Chuvash Republic, Russia) was officially inaugurated in the presence of Ramon Sarió, Managing Director at...