The symposium on “modern and profitable high-quality production solutions for the Turkish clay brick and tile industry”, held in Izmir at the end of April 2015 attracted around 60 representatives from almost 50 Turkish companies in the ceramics and heavy clay sectors.

“It was proof of the huge interest the audience had for the latest news from technology providers for the brick and tile industries that they stayed to follow additional, off-the-agenda presentations,” stated Alessandro Colucci, manager in charge of the working group of European ceramic technology suppliers. “This is a big success.” The seventeen company presentations centred on topics such as “preparation and shaping”, “drying and firing”, “material transport”, “technologies for whitewares and other ceramic products” and “turnkey plants”.

The symposium was opened by Kadir Basoglu, President of the Turkish association of brickmakers “Tugla ve Kiremit Sanayicileri Dernegi” (TUKDER), Dries van Hapert, Chairman of ECTS, and Zafer Kayili, General Manager of the co-organizing member company AR-SAN Makina Imalat Tic. A.S. The latter explained: “We have lobbied for this conference to happen because the Turkish brickmakers have to modernize their plants if they want to withstand growing market pressure.”

Currently, there are more than 300 active brick plants in Turkey. Most of them work with coal-fired Hoffmann kilns. The branch, although operating in a thriving economic environment and profiting from a healthy construction boom, has to cope with rising wages and health and safety standards. Wages, being responsible for more than 40% of total costs, are a critical factor while cost inflation cannot be offloaded to the final customers.

Additionally, competing building materials such as aerated autoclaved concrete blocks, or, in the case of roofing, plastics, are gaining market shares. With regard to purchasing equipment, the industry is very price-sensitive but at the same time, sees the necessity to invest in more automation if it wants to keep pace in an increasingly competitive environment.

The ECTS members are looking forward to seeing many of the participants again in Munich at ceramitec from 20 to 23 October 2015.

www.eu-ceramics.org
This article appeared in 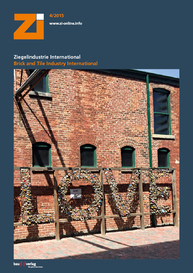 A large assembly of Turkish professionals gathered in Turgutlu for the conference on innovative technologies for drying and firing developed by Cleia. Murat Cevik, Cleia sales manager for Turkey, and...