The first delivery consisted of two mirror-like lines for the shaping of pressed standard tiles, which have already been producing since 2008 and were equipped completely by Bongioanni Macchine S.p.A. in Fossano, Italy. These two production lines operate with a rate of 20 strokes/minute for the production of standard tiles using resin moulds and 17 strokes/minute for plaster moulds. The four presses of type Crono 333 – the largest presses manufactured by Bongioanni Macchine – are each equipped with three moulds and fed by two independent lines. Installed on the drum with a width of 1800 mm are three moulds for tiles with a coverage of 10/m² with sufficient spacing to allow the alternate positioning of the pressed products on the drying frame. All moulds and the related equipment have been designed and realized by Bongioanni Stampi in cooperation with the technicians of the customer.

The new line for the production of accessory tiles, the first one in Greece, will be completed and put into operation in the course of 2009. It consists of a cutting and bat transport line which is suitable for all the various accessory models and feeds the Bongioanni hydraulic press of type Hydromatic IP 133. This is the largest hydraulic press ever built by the Italian Company. It can work with one, two or three moulds, according to the production requirements, reaching output capacities of up to 800 tiles/hour. Based on the comprehensive experience gained by Bongioanni in the field of hydraulics, this press exploits the functioning principle of the numerically controlled machine tools for the control of the movements of the table, compressor, loading of the clay bats and unloading of the shaped products. Thanks to the immense versatility of this machine, since the completion of the first model in 2006 already 8 presses have been installed so far or are under construction.

Also in the case of this delivery, KE.B.E. has confirmed its choice on the basis of the excellent service assistance and high professional and qualitative level of Bongioanni Stampi S.r.l., and entrusted them with the order for the moulds for the entire range of special and accessory tiles to match the complete product programme. 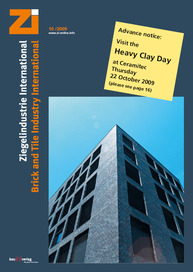 Bongioanni Moulds and dies constantly develops its products and con­tinues its technological innovation policy in the service of its customers. The company has now improved the concept of the trimmer...

In January 2017, at the Bongioanni Stampi plant in Fossano, Italy, roofing tile model no. 3014-ST was developed for a French-type double-troughed interlocking tile ordered by Mazarrón, a customer in...

Weight optimization of a roofing tile based on FEM calculations

After the successful revamp of the Alegra 12 (formerly FD) flat tile and its accessories, the flagship model in the Wienerberger product range in Holland, it was the turn of OVH tile to undergo a...