The demographic and socio-cultural change in German society also has consequences for the country’s housing market. Various institutes have esti­mated a new build requirement of just under 400 000 housing units annually to provide Germany with affordable housing of an appropriate quality standard in the mid-term.

Unlike ten years ago, it is not only growth that‘s needed, but in the towns and cities in particular there is a need for renewal and adaption.

Currently, with around 151 500 completions, new builds have hit a historic low in Germany. For the last four years, Germany has trailed behind the other European countries in the construction of new housing. In the mean time, almost all its neighbouring countries have reported at least double the level of new builds.

This deficit can be attributed, amongst other things, to the general political situation in Germany: the governmental subsidy and tax instruments are not oriented to the age structure of the existing housing stock, to the demographic development of the population or changing housing needs. Moreover, the government aid focussed on energy-efficient refurbishment is increasingly hindering demolition and replacement new builds, which would also be the sensible option in construction, housing efficiency as well as economic terms.

Against this background, fresh impetus for the construction of new housing is long overdue in Germany!

The misapprehension that “Germany is now built” also has severe consequences for the construction and property industry. This industry still holds a share of around 21% overall in German gross domestic productivity. In addition, the number of people employed in the main building trades has fallen from 1.4 mill. in 1995 to the current level of 0.7 mill. This massive loss of jobs has come as a result of the bankruptcy of many SMEs. Germany’s former Federal Minister of Building, Wolfgang Tiefensee, established back in 2006 that one billion euros of investment in construction creates or secures 25 000 jobs.

The last few years have shown that economic growth cannot be realized without the economically indispensable mainstay that is the “building industry” with its effect on employment policy. With more sustained building activity, leading to a stabilization of the building industry, it will be possible to ensure the existence of a functioning economic sector in Germany that is also able to solve pressing infrastructure and housing problems.

After all, the consequence of putting an industrial sector like the building industry “on hold” as a result of misjudgement of its growth potential is to prevent growth, foster unemployment and create a shortage of modern and affordable housing. 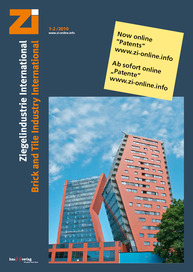 The brick and tile industry can be relied on as a motor for economic growth  that was demonstrated yet again in 2021. Less reliable proved the global supply chains. An overall very volatile...

In 2011, Germanys building construction sector was in the midst of an upswing in which the business volume rose 5.2% over the previous year, to ?207.4?billion. The results for 2012, though, are a...