The new Crono 334 four-mould press presented at Ceramitec 2012, a version of the tried and tested Crono 333 that has been successfully used for years in many plants, has now been installed by Bongioanni three times. In 2013–2014 two German-made presses were replaced at a French manufacturer of roofing materials. Despite the weight of more than 42 t, the replacement was completed in just three days. After eight days the presses were operating at the required rate. At the same time, a new patent-protected control panel in compliance with Bongioanni standards was installed.

The press unit made of vacuum-cast head-treated steel undergoes a defined final grinding to give it a special profile based on Bongioanni’s decades of experience. The press can be equipped with any type of mould: plaster, steel or resin with rubber sheet and it is possible to use an electrophoresis system.

The base of the press has been designed to allow the uncomplicated replacement of existing presses built by other manufacturers, only small and simple changes to the foundation frame are needed. Loading, setting and transport of the tiles were not changed.

The advantages of the Crono 334 include an automatic lubrication system for the compressor guides with low oil circulation. The operative can set the drum to stop as required, speeding up mould changes. Each moulding operation can be independently controlled, starting from bat loading to the control of the pick-up and release (trimmer head) equipment, with separate setting for the opening/closing of the vacuum valves, as well as the expulsion of the tile during the set-down phase.

The machine is equipped with all legally required safety systems. It is possible to program a very slow speed, for instance for adjustment of the tools. This allows the operative to remain near the press without any risk to his safety. This is made possible by a state-of-the-art two-channel electronic system.

At Bongioanni’s plant in Fossano, Italy, all necessary replacement parts for the presses are always available. 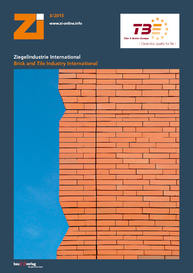 In view of the successful commissioning of the two roofing tile production lines realized by Bongioanni for one of the main manufacturers of roofing tiles in Greece, their Managing Director Mr...

1 Introduction When Gerrit de Boer founded his own company in 1936, he could hardly have guessed that, in the span of 75 years, his little workshop would evolve into one of the worlds best-known...

Händle engineered the Nova II in the year 2000 at the behest of roof tile producer Nibra Dachkeramik. One of their engineers, Dipl.-Ing. Manfred Bracht, it seems, had invented and patented a...

Maximum manufacturing flexibility as regards mould changeovers, product handling with practically zero wear and advanced solutions to recover the kinetic energy in the press and so provide...