Celebrating its 50th anniversary, Cerame-Unie hosted the very first Ceramic Days from 26 to 28 November 2012. Numerous members from the European ceramics industry flocked to Brussels for the annual meetings and two other notable events.

One highlight was the presentation of the “Ceramic Roadmap” hot off the press. Experts with various backgrounds have contributed over the year 2012 with studies, illustrations and knowledge from the ceramics industry. The concerted effort resulted in a comprehensive response to the four recent roadmaps of the European Commission on a competitive low-carbon economy, transport, resource efficiency and energy. The first common vision for the entire industry and the strategic importance of the ceramics sector for Europe are demonstrated on 32 pages.

The European ceramics industry employs more than 200 000 people in all regions of Europe. About a quarter of the production is sold outside of the EU, contributing to a positive trade balance. Statistics verify the efficiency of the industry: over 1000 ceramic installations represent more than 10% of all industrial installations but only 0.5% of the total CO2 emissions covered by the EU Emissions Trading Scheme. The Ceramic Roadmap also analysed in two internally developed models how further reductions could be achieved. Fuel is responsible for two-thirds of the emissions and syngas could help to reduce them significantly. Additionally, certain raw materials formulation changes allow more efficient firing. The ceramics industry has done its homework and indicates promising current and future technologies in a list. Together with policy makers, it now has to tap the full potential with a supportive and reliable financial and legal framework.

Officials and members highly acknowledged the comprehensive presentation by Dr Laura Cohen from the British Ceramic Confederation, who drove the project smoothly to success. William Neale, Member of the Cabinet of Environment Commissioner, Potoc˘nik, enjoyed a preview and held the opening speech. Over 100 pairs of eyes and ears then followed the informative exchange between Dr Heimo Scheuch, TBE President, Hans Bergmann, DG Climate, Mr Wyns, ­Director of the Centre for Clean Air Policy, and Joachim Heym, EuTeCer President, before more detailed sessions continued in the European Parliament.
13th European Parliament Ceramics Forum (EPCF)
The clear goal of this EPCF was to explore the implications of latest, crucial policy developments. Over 150 people came to see the four high-level debates.
­Following the morning event, former rapporteur MEP Chris Davies moderated the first panel on the Roadmap moving to a competitive low-carbon economy in 2050.
Werner Bosmans’ presentation on “How do we measure progress in resource efficiency?” was followed by a stimulating exchange on feasible, accurate indicators and lifecycles. Panel number three dealt with the most labour-intense sectors of ceramics, namely construction, before prominent guests from the European Commission and industry reviewed the sensitive question of fair trade.
The Ceramic Days concluded solemnly with a reception in the European Parliament and a keynote speech by Fabrizzia Benini representing Commission Vice-President Antonio Tajani. A big thank you goes to the Chairmen MEP Michael Cashman and MEP Malcom Harbour who will host the 14th EPCF plenary meeting in 2013.
This article appeared in 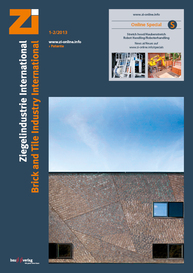 The next European Parliament Ceramics Forum (EPCF) debating the ceramic solutions for resource efficiency will be held on Thursday 26 May 2011, from 13:00 to 15:00. We refer to the attached...

In many sectors today mainstream policy is made on European level. The first step in this is often the publication of a roadmap. In these roadmaps, the ­European Commission sets down how it imagines...

European policy presently finds itself in a phase of reorientation; the revision of the EU Treaty in recent years was only the beginning. The program Europe Strategy 2020  for smart, sustainable,...