The Fritz Höger Award for Brick Architecture invites designers to showcase the entire architectural potential of the clay building material. Awarded for the fifth time this year, it honours the best buildings built with clay brick and presents them to a wide public. Three of these are described below as representative of the many submissions. All award-winning projects are presented on the website for the competition, which is organized by the Initiative Bauen mit Backstein (Building with Brick Initiative).

Gold in the category for residential building/apartment complex was awarded to the Singerstrasse project in Berlin designed by Giorgio Gullotta Architects, based in Hamburg. The ten-storey structure with 71 residential units has been built with a reinforced concrete frame and highly insulated brick facade. Projections and offsets in the warm grey brick masonry make for an interplay of light and shadow and lend structure to the facade. Vertical glazed joints in a stick system break up the horizontal band of balconies and proportionate the relatively wide building facades. The champagne-coloured wooden-aluminium windows and the generously horizontally curved balcony railings coupled with the warm grey bricks lend the apartment complex an easy elegance.

Also awarded gold in the category for residential construction / apartment complex was Reinhard Martin Architect BDA, Münster, for the refurbishment of the residential complex on Schiffahrter Damm in Münster. The objective here was to think a step ahead to add extensions and make the building complex fit for the future. The brick masonry of the existing building, the somewhat lighter brick used for the extension, the penthouse looking something like a clip and the loggias appear as if they have been put together from a construction kit. With the building bricks from the existing building and the extensions being left visible, a residential building with its own distinctive quality in the context of the neighbourhood has been erected. As a result, despite having a larger volume, the extension appears less massive than the original building.

Rooftop greenhouse integrated in the building in Oberhausen

Gold in the category Public Buildings, Recreation and Sport was presented to the project Building-Integrated Rooftop Greenhouse Oberhausen by Kuehn Malvezzi Architects, Berlin. The building combines functions like a job centre, a rooftop greenhouse and a vertical garden open to the public. The brick facade was designed as a sort of draped robe rather than giving the impression of a solid structure. The rooftop greenhouse lends the structure a representative status commensurate to its central location in the town.

Winners of the Fritz Höger Award 2020 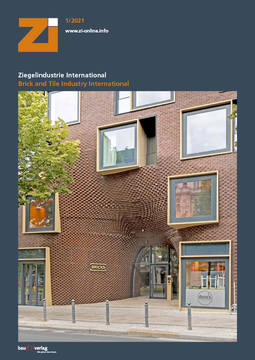 The 2017 Fritz Höger Awards for Excellence in Brick Architecture were conferred at Deutsches Architektur Zentrum (DAZ) in Berlin on October 6, 2017. The winning entries to this years competition...