In 2015, Keller HCW received a fiercely contested contract from the Ibstock Group to build an ultramodern facing brick plant in the English village of Ibstock. Not only is it the third brick plant at this location for the UK‘s largest brick manufacturer – it is also the eighth plant supplied by Keller. The new plant, whose commissioning is scheduled for 2017, will produce approximately 100 million soft mud bricks per year.

The scope of the project for the renowned Laggenbeck-based manufacturer of machinery and plants starts downstream of the soft mud plant supplied by De Boer Machines Nederland B.V.

As Keller HCW area sales manager Peter Hinken emphasizes, the plant impresses, amongst other things, with its very low energy consumption requirements: “In Ibstock we shall build a tunnel dryer with slotted jet walls and integrated sand collecting and cleaning equipment. This is still relatively uncommon for soft mud installations; however, it facilitates optimal heat energy management.“ 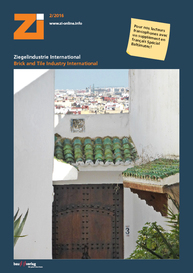 1 Introduction Bricks have been produced in Ibstock since the 1830s. Since then, the site has continued to develop sustainably with innovation based on tradition. In October 2015, Ibstock was...

One of the first plants for grinding and filling ceramic blocks with mineral-fibre inserts ever to be installed within the Russian Federation was commissioned in July 2010 at the Kaluzhski zawod...

In November 2010, Keller HCW GmbH opened its new subsidiary OOO Keller Vostok in Moscow. Keller HCW is therefore in a position to handle plant upgrades, modifications and the supply of spare and...

On 25 September 2014, the largest order in Kellers history was signed. Plants I and II were successfully approved by and handed over to the customer El Khayyat in mid-March 2018. With this, the two...