Beralmar has received a new order for a solid fuel firing installation. It is a Promatic installation for the company I-Crni, which will be installed at a brick factory in Cazin (Bosnia and Herzegovina), in the northwest of the Balkans.

This new installation will substitute at least 70% of the current consumption of fuel oil, a fuel that is rising in price all over the region, with petcoke. This investment will be amortised in just a few months, since the price of fuel oil is approximately four times that of petcoke.

This will be the third kiln operating using solid fuel firing installations supplied by Beralmar in Bosnia, making a total of twelve in the countries of the former Yugoslavia.

Order for a biomass heat generator in Bosnia

Beralmar has just received an order for a biomass heat generator from the Top Banja Luka ceramics plant, near Banja Luka, in the north of Bosnia and Herzegovina.

The heat generator consists of a Puls model combustion chamber, coupled with a GB model heat exchanger. This generator will have a maximum capacity of 2 mill. Kcal/h (2 326 kWh) in clean air. The combustion and heat exchange operations take place in two separate machines, increasing the generator’s energy efficiency in such a way that ratios of up to 85% are expected.

The fuel to be used is pellets with a maximum length of 30 mm and a moisture content of less than 6%, which will substitute the consumption of fuel oil in the dryer.

According to Beralmar, solid fuels are still relatively unknown in the drying process, and not only enable major energy savings, but are also a possible source of income owing to the margin they offer in the trading of CO2-emission rights. 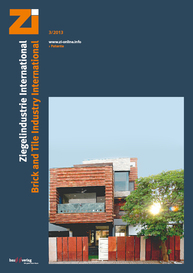 The Spanish company Beralmar is supplying a Promatic system for the tunnel kiln at the facility owned by OAO Temirtau Kirpich, Kazakhstan. The system is to supply 100% of the energy needed for the...

At a new Apollonia brick  works being built in Obilliq, in the east of the Balkan country, petcoke will be used as the main fuel in the kiln. The Promatic model installed is designed to ­provide...

The Spanish company ­Beralmar has received an order to supply a new production line for the Boshan ­ceramics company, a few miles from Astana, the capital of Kazakhstan. The order includes a...