At ceramitec, Refratechnik Ceramics presented an innovative “base frame” for roofing tile firing. When tiles are fired in H-setters, breakage often occurs at the feet of the setters. One reason for this is, firstly, the different thermal expansion coefficients of the cassettes compared to the bearing elements of the kiln car level.

Secondly, the left and the right foot of the cassette stack are usually each placed on separate support elements, which has the effect that during the heating and cooling operation the changes in length run in opposite directions, resulting in high friction forces. This stress occurs during each furnace run and facilitates damage to the cassette feet in the form of flaking or even malfunction of the cassette.

These problems can be eliminated with the use of a cast base frame. The base frame, which consists of the same material as the cassette, accommodates the cassette stack as a solid component. Thus, the size and direction of the length changes in the thermal process are identical, which minimises the damaging frictional forces and optimally protects the feet.

The base frame is statically more stable in design than the H-setter, so also stresses caused by movements in the kiln car deck can be accommodated. This means that fewer deformation forces pass into the setter.

The operator benefits from a lower breakage rate and therefore from a longer lifetime of the setters. 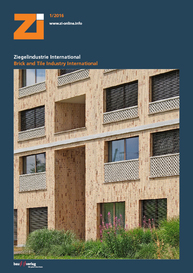 Refratechnik Ceramics GmbH  formally BURTON  presented itself successfully at the world's leading trade fair for the ceramics industry, the Ceramitec in Munich. Customers and interested parties...

High-quality, energy-wise refractory systems for the brick and tile industries in Spain and South America

Thanks to demand for high-quality products, Refratechnik Ceramics  formerly Burton  has secured some important new construction and rehabilitation projects on the Spanish and South American...

Refratechnik Ceramics GmbH presented itself successfully at ceramitec in Munich. Customers and interested parties from all continents saw the benefits of the refractory systems. The tunnel kiln car...

Extending the service life of H-cassettes

Refratechnik Ceramics has developed a base frame that minimizes spalling on H-cassettes, thus increasing their service life accordingly. Since the materials of which existing kiln-car superstructures...

Wertingen Roofing Tile Plant  a committed host Creaton AG with its roofing tile plants in Wertingen and Roggden was the destination for the 2015 Zi field trip. Of the six sponsors Grothe...