On 28 June 2011 a seminar organized by the Deutsche Gesellschaft für Internationale Zusammen-arbeit (GIZ) in cooperation with the Association des Tunisiens Diplômés des Universités Allemandes ­(ATDUA), the Agence Nationale pour la Maitrise de l’Energie (ANME), the Centre Technique des Matériaux de Construction de la Céramique et du Verre (CTMCCV), and the High-tech Brennersysteme GmbH was held in Tunis. Goal of the seminar was to inform representatives of the Tunisian clay brick and tile industry about innovations with regard to energy consumption in clay brick and tile production. The ­papers primarily addressed issues of energy saving and operations management as well as the use of alternative raw materials in production as well as energy generation. The possibilities of financing modernization projects with the help of CDM projects (Clean Development Mechanism) were also presented.

Despite the difficult political situation, the clay brick and tile producers in the country are confident. The ongoing boom in exports to Libya and Algeria, which to a large extent is not recorded in the statistics, is contributing to lively investment, the building of new plants and the modernization of existing plants. Inadequate maintenance of the equipment in most plants remains a problem. Equally under criticism is the inadequate availability of training, without, however, identifying a responsible cause or suggesting re­mediation measures.

Technologies that in traditional brick and tile making countries have only been recognized as expedient only in isolated cases, for example equipment for plant-internal power generation, are often funded by governmental or semi-governmental offices, sometimes without careful analysis of the technical ­issues. In international comparison the clay brick and tile industry in Tunisia cannot be regarded as very competitive in terms of technology as the product quality in particular must be improved considerably.

Tunisia has set itself a very ambitious energy programme: By 2016, according to details from the ANME, 1 000 MW electric energy, including 200 MW from renewable sources, are to be exported to Europe. At the same time, the total energy consumption of the country is to be lowered by 22%. The question of how these goals are to be achieved remains open.

Produced are mainly solid bricks, which make up around 10% of the market, vertically perforated bricks with two or three rows of equally sized perforations as well as products for brick floors.

In Tunisia 129 brickworks are currently in operation («Table 1), which employ around 4 000 people. The annual production capacity of below 7.25 mill. tonnes in the year 2006 increased to over 10.5 mill. tonnes in the year 2010. Plants with a capacity < 0.6 mill. t/year are under construction. The published production figures indicate an average capacity utilization of around 70%.

The energy input of the ­Tunisian brick and tile industry for the year 2010 is specified for gas-fired plants at around 39 to 48 Nm3 per thousand bricks. For oil-fired plants, the consumption should be at around 35 to 45 kg/t. The power consumption is estimated at 30 to 40 kWh/t. The figures are based on data from the CTMCCV. 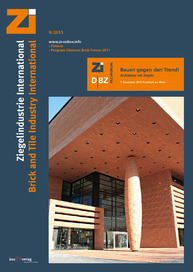 Sacmi Heavy Clay has won yet another strategically important order on the Tunisian market and this time it is all about process automation. Ideal Brique, one of the leading brick manufacturers in...

The advantage of research

To stand its ground in competition with other building materials, the brick and tile industry must continue to bank on innovation and research.  At the Bau trade fair in Munich in late January,...