Unfortunately for many, the severe drop in demand has engendered substantial concentration in many branches of industry, including the brick and tile sector. Martin Roth, General Secretary of the Federal German Association of the Brick and Tile Industry, Regd, comments: “Due to the years-long crisis and resultant competitive pressure, prices for heavy clay products in Germany are still lower than anywhere else in Europe. Well, that does help exports to neighbouring countries, at least. At the same time, intense competition with other construction materials has given rise to German bricks and tiles of uniquely high quality by global comparison, including numerous innovations.” 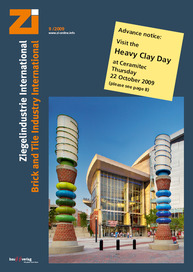 German brick and tile industry: 15 years on a shrinking market

Martin Roth, managing director of the Federal German Association of the Brick and Tile Industry: We are still unsure about whether the brick and tile industry actually has started to recover from...

Germanys brick and tile industry: Back on the rise

For three years now, the branchs output has remained fairly constant. Nor has there been any substantial change in the number of companies and employees operating in the brick & tile sector. The...

German brick and tile industry on course for further growth

All in all, the clay brick and tile industry generated a turnover of  1.5 bill., which corresponds to a plus of 3.2?% on the previous year. The employees also benefited from this, in 2017 just...