The growth of 3.6% expected at the beginning of 2008 for the total building market had to be adjusted to 3.25% at the end of the year. Beside new non-residential building projects, renovation and refurbishment greatly contributed to this growth. In 2008 future expectations for 2009 and the years after had to be adjusted downwards on an almost monthly basis. For the coming years it is expected that the growth of the building sector will greatly reduce.

The number of dwellings completed fell in 2008 by 2% to approx. 79 000. That is a little lower than in 2007, the top year of this young century. The largest fall of this took place in the last quarter of 2008, namely -11% in comparison with the last quarter of 2007. The number of apartments within the completed new housing rose again. This is regretted by the brick manufacturing sector as ground-oriented dwellings use absolutely and relatively more bricks than a non-ground-oriented dwelling.

The number of permits issued for new homes fell slightly in 2008 (-1%). Despite this fall the number of dwellings awaiting completion has increased to more than 184 000. This is an increase of more than 4% in comparison to the end of 2007.

The number of facing bricks sold fell in 2008 by 8% in comparison to 2007. This meant a fall of 92 million to a record low of 1 063 million. The export of Dutch facing bricks has fallen by more than a quarter to 171 million WF. This export fall is also a result of the declining building market in the countries surrounding the Netherlands.

The total national sales of facing bricks fell by 2%. This fall is entirely borne by the Dutch facing brick and is in line with the number of completions in 2008 (-2%).

The rising trend in the sales of paving bricks since the beginning of this century continued in the year under review. These sales rose by 6% to an all time high of 384 million WF.

Of these, almost 35 million WF were delivered as packages for mechanized paving. This is a good result considering the fact that the new development of mechanized paving is requiring substantial adaptations in factories.

With a view to the significant position of the paving brick, research was carried out from which it appeared that paving bricks laid in a herringbone pattern create a measured additional noise of only 2 dB at 30, 40 and 50 km/h. The legal standards could be adjusted as a result of this research.

In collaboration with the Belgian Baksteenfederatie (Clay Brick Federation) the KNB commenced research into brickwork. Central in this is the development of a test with a predictive value for the risk of white deposits on brickwork. Very little is known about this. Follow-up research started in 2007 into the green discoloration of brickwork and was concluded in 2008. The results of the laboratory research, however, showed insufficient bearing on practice.

Furthermore the KNB was involved in handing out to students of the Technical University of Eindhoven the British ‘Manual for Design of Plain Masonry in Building Structures to Eurocode 6‘ in the framework of the changeover of the curriculum from Dutch into English.

The prospects for the sales of facing bricks for the next few years are difficult to estimate due to the current economic situation. A decline in the housing market of at least 10% is expected in 2009 and another 10% in 2010. This is expected to take place mainly in the home-buying sector. For now it is expected that the sales of facing bricks will fall in 2010 to below 900 million WF. However the future for the coming years is highly uncertain, which means that these sales predictions are also surrounded by a high degree of inaccuracy.

The Dutch brick industry has 41 factories and a total workforce of approximately 1 600 employees who achieve an annual production of some 1.5 billion bricks. 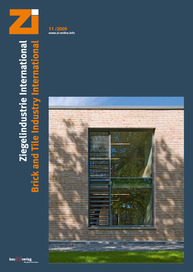 In 2010, the sales of facing bricks fell to a historic low. Although for the near future hope can be drawn from a slightly improving building sector economy and from the way in which the facing brick...