It is certainly an irony of fate that a housing bubble of all things triggered the current financial and economic crisis. That we in Germany of all people are now affected by the consequences of practices that are diametric to our experiences here in this country. While in the USA, Spain, Ireland, the United Kingdom and many other countries, the governments and the financial systems did everything to make the dream of their own home possible for its citizens, with us building new houses has been almost demonized. The unspeakable words “Germany is built” has done the rounds and every new building is branded as environmental sacrilege, further sealing of the landscape and an unnecessary consumption of resources. It is quite sufficient for us to refurbish some old huts with a bit of insulation, a few better windows and a lick of paint, thereby improving their energy efficiency.

Neither extreme – unbridled new housing construction and the sole backing of existing housing stock – leads to the desired success. The objective of a sustainable housing construction policy should be a good mix of older solid buildings, but also new houses matched to the current needs of the population. A survey of the Pestel Institute commissioned by the Deutsche Gesellschaft für Mauerwerksbau (German Association of Masonry Construction) shows that with the current extent of new building, we shall not meet this objective. To provide the aging population with suitable housing, an annual completion rate of 350 000 to 400 000 newbuilds would be necessary. As the latest study by Euroconstruct, a group of European business research institutes, shows, with such newbuild activity Germany would not even be amongst the middle-ranking European countries. Germany currently trails far behind, in last place of this ranking.

What do other countries do differently than Germany? The answer is relatively simple: new building is encouraged rather than impeded by government. France and Italy, for example, also have solid housing stock, in these countries too the population is growing older. There too some land and resources are used up for building. But obviously, in these countries, the value of the having your own home enjoys more respect in political terms and the property business is rated more highly as an economic factor.

Germany’s scrap bonus for old cars shows us how to do it. In Germany money from the government has always had an almost compulsive effect on the public. Even car drivers who cannot really afford it financially are buying new cars and scrapping their old ones, some of which are actually still worth more than the scrap bonus. The German government is lamenting the many billions that this scheme is costing it. At the same time, however, with the value added tax it is earning more than it is spending. On top of this come the additional taxes and social contributions sparked by these sales.

In Germany – unfortunately! – there will be no scrap bonus for old houses. But a growing number of people in politics are realizing how an entire sector could be relaunched with relatively low level of government funding. Housing construction would be predestined for such a scheme. Almost 100% of every euro in government funding would stay in Germany and generate several additional euros in government revenue. And the incidental effects that used to be attributed to the homeowner’s allowance we had earlier, have – at the latest with the collapse of the newbuild completion figures in recent years – turned out just nonsense. With the scheme “Fresh Impetus for Housing Construction”, all associations with an interest in housing construction are now aiming to shake up the politicians and set the course for a better future.

General Secretary of the Federal German Association of the Brick and Tile Industry Regd, Bonn 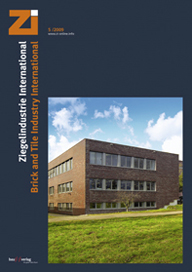 The financial/economic crisis continues on, and little or nothing is being invested in the ceramic industry. In order to avoid debt entanglement, Christian Wagner, Novokeram, chose to file for...

Seven fat years for the Federal Republic of Germany and especially for the domestic property market have been forecast by Daniel Gross, Director of Brussels economic research centre CEPS, and even...

Other countries, other problems!

To stem speculations on the property market in Beijing, a family may in future only buy one property in the Chinese capital. As the China News Service reports, this city council regulation is aimed...