On 18 December 2016, the brick plant “SARL Briqueterie de Tidjelabine” was officially opened in the presence of the Wali of the Boumerdes province, His Excellency Abderrahmane Madani Fouatih.

The managing director of the company, Hamid Yacef, addressed the more than 200 assembled guests, explaining the investments made in the new fully automated production plant and his strategy for the production of first-rate bricks for the growth region around Algiers. During the subsequent tour of the factory, the invited guests were able to gain an overall impression of the excellent brick quality, the professional plant organization and of the state-of-the-art robot-assisted production technology.

For some time now, the contractually agreed quantity of 800 t premium bricks per day has been produced in the plant, corresponding to a production capacity of 280 000 t per year. This makes the brick plant one of the largest plants installed in Algeria. A notable feature in this context is the production technology: drying is realized with a rapid dryer of u-shaped design that dries the bricks in just three hours. This plant concept, which has been implemented for the first time, occupies very little space and is very economical – all handling equipment on the wet side, setting and packaging installation are arranged centrally so that basically two operatives are sufficient to monitor the entire production process.

Lingl acted as general contractor in this project: the scope of supply included the complete preparation and shaping equipment of Rehart-Petersen brand, the complete production line as well as an Optiflow rapid dryer and a Lingl tunnel kiln. All the conveyors for material feed and waste return have also been manufactured and supplied by Lingl.

This important event represents another milestone in the successful history of Lingl in Algeria. 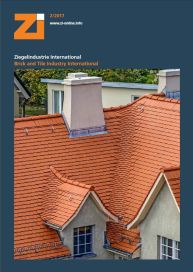 Highlights for the clay brick and tile industry

Hans Lingl Anlagenbau und Verfahrenstechnik GmbH & Co.KG Highlights for the clay brick and tile industry On the exhibition stand covering more than 500 m², visitors were welcomed to take a look at...

Grenzebach and Lingl have entered into cooperation in brick filling installations. From now on both partners will jointly offer the technological systems for filling wall bricks with small cubes of...