Lower Bavarian heavy clay producer Leipfinger-Bader has renaturalized a 4.3-hectare clay pit and turned it into a modern solar farm. Thanks to high insolation levels, a predominantly southerly orientation and nearby feed-in options, the property is excellently suited for capturing solar energy. The open-space photovoltaic system has been providing the local power grid with solar energy since late September 2013. Leipfinger-Bader is expecting the array to yield some 2 million kW of electricity per year, some of which could be put to proprietary use in the future. The company has also had a number of rooftop photovoltaic systems on line for some time now at their Vatersdorf and Puttenhausen facilities, while the “Vatersdorf Solar Farm” is brand new.
This article appeared in 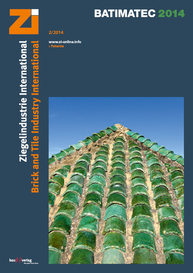 Now, for the third time, we at the trade journal Zi Brick and Tile Industry International are organizing a student field trip. On 13 and 14 December, students and industry partners from the clay...

Ziegelwerke Leipfinger-Bader in Vatersdorf has acquired 100?% of the shares in the façade tile manufacturer Tonality in Weroth, which until the end of 2017 still operated on the market as Creatons...