Lucideon, formerly known as Ceram, was commissioned by the Brick Development Association (BDA) to produce a generic carbon footprint (cradle to customer) report for the UK clay brick manufacturing sector.

The manufacturing of clay bricks is energy-intensive, the consumption of natural gas in kilns is high and “process emissions” are formed as a result of thermal decomposition of clays, hence the carbon footprint of clay brick production, expressed as tonnes of CO2 equivalent per tonnes of fired bricks is of great interest to the sector and end-users.

The report, published in late 2013, is based on production data from 2011, and compares this to the 2008 data, thus highlighting changes in the carbon impact profile in the intervening years. For the most part, the carbon footprint report indicates that emission levels remained comparatively similar; however, the 2011 generic footprint for the UK clay brick sector was 0.252 tCO2e/t, a slight increase on the 0.244 tCO2e/t reported for 2008.

A direct comparison between the 2008 and 2011 data sets would have been ideal, unfortunately the economic downturn led to four of the original 12 works ceasing production, before the 2011 production year. In order to maintain the number of reporting brickworks, alternative brickworks were identified as replacements. As no two brickworks are the same, it is possible that the change in reporting sites influenced the results, above and beyond what would have been seen through changes in the operation of the brickworks.

The carbon emission contributions were split into specific areas of impact: raw materials, production process, Head Office contribution (including company cars and business travel) and delivery to the client/building site.

Putting the results into context, the main impact in terms of carbon emissions resulted from the production process, electricity used and fossil fuels burned in the kilns; this accounts for approximately 64% of the carbon footprint. At 31%, the raw materials are the next highest contributor based on the emissions resulting from the presence of naturally occurring organic carbon in the clays, or through the thermal decomposition of limestone, chalk and fossils, all of which are typically composed of the mineral calcite (calcium carbonate – CaCO3). At high temperatures, calcite breaks down to calcium oxide (CaO) with carbon dioxide (CO2) being evolved as a gas in the kiln atmosphere. Not all clays contain these calcium-carbonate-based minerals and therefore the raw material contributions can vary significantly from one clay deposit to another. Carbon emissions resulting from the transport from the factory gate to the client’s building site or merchant’s yard account for around 5% of the carbon footprint, whilst the Head Office contribution is typically less than 1% of the total carbon footprint, even when business travel is included.

Dr Andrew Smith, Head of Sustainability and Construction Materials, commented: “The overall results appear to reflect the transition from the major production downturn in 2008/2009 and into the lower, but more stable production levels in 2011, approximately 30 000 tonnes per annum lower. This lower level of production would therefore appear to be “sub-optimal” and thus the impact from the production process appears to be the underlying cause for the increase in the overall generic carbon footprint.” 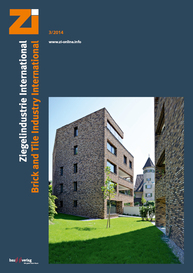 SBBC Societé Briqueterie Bati Chaouia is one of the biggest brickworks in Morocco. Beginning in 2008, both energy efficiency and fuel switch measures were technically implemented in the production...

The acceleration of the construction sector is motivating Brazils clay brick and tile industry to grow and improve. This goal brings together all the companies in the sector, even micro and small...

CO2 emission trading: What is happening from 2013?

1 Small installation opt-out rule From 2013 installations that emit less than 25?000 tonnes CO2 per year can be exempted from the emission trading scheme by the member states after consultation with...

CO2 emission trading: What can the brick and tile industry expect from 2021?

The paper addresses the situation with regard to EU emission trading from 2021. From 2021 to 2030, CO2 trading is going into its fourth round. After the relevant directive was approved in spring 2018,...