The Röben Group is extending its commitment in the USA. Its subsidiary Triangle Brick Company in Durham, North Carolina, has now announced plans for the construction of a new brick plant in the US state of Texas. The plant will be built in Clay County near Henrietta, around 150 kilometres northwest of Dallas. The plant engineering will be supplied by Lingl.

“The ClayCounty brick plant is opening up new opportunities for us in the South West markets of the USA,” says Röben’s Managing Director Wilhelm-Renke Röben, explaining the decision behind building the new plant. “The know-how we have acquired in the American market over the decades and the trend towards greater sustainability in building in the USA too have contributed to us taking this step.”

Construction of the new plant is scheduled for the end of this year so that brick production can begin in early 2016. The new plant is set to produce 100 mill. bricks per year in the American modular size, that corresponds to around 70 mill. standard size (NF) bricks. More than 45 new jobs are planned for the new plant, including production and sales. From Clay County, the bricks will be supplied to Texas, Oklahoma, Louisiana and Arkansas.

The Triangle Brick Co. has been part of the Röben Group for 35 years. Röben took over the company in Durham, North Carolina in 1979. With four plants located in central North Carolina, Triangle Brick is one of the largest brick producers on the East Coast and in the “Top Ten” of the American brick industry. 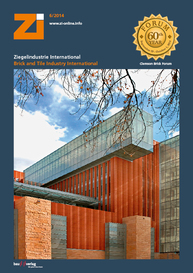