After they have been dried, green clay bricks enter the preheating zone of the tunnel kiln with a varying residual water content. In this preheating zone, the following processes take place in sequence: evaporation of the residual water, splitting off and outgassing of volatile organic substances, low-temperature carbonization processes (especially in the case of vertically perforated bricks with poreformers), liberation and outgassing of crystallization water, lime deacidifcation, and other chemical processes. These reactions are all dependent on the pore spaces existing in the brick at the particular time and the diffusion resistance in these pores. In this range of the preheating zone, there is a considerable danger to the bricks to be fired from cracks and surface spalling. So, for example – even in academic teaching - it is assumed that low porosity and very high diffusion resistance of the green bricks are responsible for the fact that insufficiently dried bricks are torn apart by vapour pressures.

During the firing process, high temperature gradients are formed near the surface of the brick. The mechanical stresses caused by thermal expansion encounter a brittle brick, the solid particles of which are not sintered, unlike in the fired body, and therefore have a comparatively weak bond. The probability that body damage and spalling are caused by thermal stresses is therefore very high.

It was the objective of this research project to investigate the influence of diffusion resistance on the reactions taking place in the preheating zone of tunnel kilns in the clay brick and tile industry up to around 600° C. In this context, it is necessary to investigate how far the diffusion properties have been proven to cause the damage, mainly cracks and spalling, occurring in this range, or whether the cause of damage can be found in mechanical stresses caused by high temperature gradients. Only when the cause can be definitely pinpointed, it will to be possible to avoid damage.

The investigations conducted led to the finding that dried green bricks always have a high porosity of over 20 vol.-%. Measurements show that the predominant percentage of the pores are not nanopores, but pores with diameters of a sufficient size for molar diffusion, which permit diffusion of reaction gases with only low flow resistance. Accordingly, the working mechanism – destruction by high vapour pressures on account of high diffusion resistances – can be excluded with great probability.

Only after presentation of a recently completed research project is it known that the strength of the green brick body is significantly dependent on the water content. The body cohesion of the still moist bricks is extremely low even when the residual water content is low; the tensile strength of these bricks is much lower than that of dry bricks. The author’s own investigations confirm this dependence and also establish that raw material reactions taking place as the brick temperature rises cause a loss of strength. For brick raw materials with different mineral compositions, accordingly different strengths result, as shown in »1, and therefore the bricks can withstand different levels of tensile stress.

Providing that sufficiently dry bricks enter the preheating zone of the tunnel kiln, no damage can be established even if the temperature differences are large. In contrast, preheating of insufficiently dried bricks with a low body cohesion caused by the water in the capillaries of the moist brick core results in damage even if the temperature differences between the brick surface and the core are only small. Bodies with textures caused by the methods used to shape the bricks are more likely to incur damage whereas bodies with fewer textures survive the preheating process damage-free although the preheating conditions are the same. In green bricks with cores still containing residual water, both the pores and the texture-related leaf capillaries are filled with water. During preheating, the water evaporates at the drying plane of the moist core. The drying plane, which migrates in the direction of the centre of the green brick as drying progresses, is supplied with the water still in the fine pores based on moisture conduction. As the water-conducting capillaries are separate from the leaf capillaries, the water in these does not participate in the water transport at all or only incompletely. The water vapour formed above the water nests in the leaf capillaries cannot diffuse unhindered through the pore network – some of which is still filled with water, so that the vapour pressure building up as the core temperature increases acts as a tensile stress inside the brick body held together by surface tension. As on fracture release, the overpressure that has built up until then is suddenly released, as a result of the increase in the saturation vapour pressure as a function of the atmospheric air pressure, a sudden, explosive evaporation ensues that completely destroys the green brick.

Without question, drying of green bricks with specific allowance for low residual water content is probably the most expedient step for minimizing the damage cause. Re-absorption of moisture before the start of the firing process – for example during production downtime – should also be avoided. Otherwise during the preheating of moist green bricks with only low strengths, gentle treatment requiring modified firing process control is necessary.

The research work on the subject of drying is currently occupying the Institute of Brick and Tile Research, which is developing processes for increasing the shaped and green brick strength. On account of the higher loadability of the green bricks in the initial phase of the preheating, strength-enhancing measures also have a positive effect on the firing of still moist green bricks. 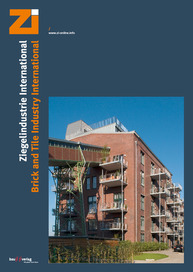 1 Introduction The firing of heavy clay products is subject to a number of such limiting factors as expansion and contraction processes, endothermic and exothermic reactions and the conversion and...

For firing high-thermal-insulation clay blocks, the raw materials must meet certain preconditions and the firing process fulfil certain requirements. These are necessary to make more efficient use of...

During firing of brick products, factors such as expansion and shrinkage processes, endothermic and exothermic reactions as well as mineral phase transformations play a significant role. In the course...