Times are hard – and the German clay brick and tile industry is starting to feel it. Production is on the decline, and the prospects are not that rosy either.

For the production of back-ing and facing bricks (clinkers), which is dependent on the construction of new buildings, the Federal German Association of the Brick and Tile Industry Regd is expecting a further decline of 10% for 2009. The economic stimulus package for housing construction will hardly have any impact on this sector as so far only insulation measures for older buildings have been promoted.

The trend towards this forecast slump is already perceptible from the current production figures for 2008. After the first three quarters of last year, a decline in the production level of around 13% for clay masonry bricks (including pavers) and a good 17% for clay roofing tiles result. With regard to interpreting the figures, however, the Federal German Association of Clay Brick and Tile Industry says that it is necessary to take into consideration that last year a large percentage of clay bricks and tiles was produced for stock, whereas this is not so much the case this year. The values compared to last year are therefore inflated. As, however, the fourth quarter of 2008 was more than probably worse than the comparative quarter of 2007, a production volume and value decline of just under 15% for masonry bricks and 20% for roofing tiles should be realistic.

The German Federal Association of the Clay Brick and Tile Industry is nevertheless optimistic that they have now got through the difficult times. Particularly against the background that the value of property in Germany has proven largely stable during the financial crisis.

The German Federal Association of the Clay Brick and Tile Industry Regd represents just under 100 companies with around 130 brickworks and 9 500 employees. The members’ sales total € 1.2 bill., the production volume for masonry bricks is just under 9 mill. m³, that for clay roofing tiles around 850 mill. units. The export quota to the European neighbouring countries is just under 17%. 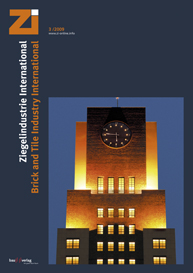 Solidarity and securing the future

These two concepts can be used to summarize the current discussion about association reorganization. Solidarity implies that the future challenges for the ­German clay brick and roofing tile industry...

Clay bricks and tiles  a constant in changing times

Do these words of Wilhelm O. Banditt, General Secretary of the Federal Association of the German Brick and Tile Industry in the 1960s, still ring true after 50 years? Clay bricks and roofing tiles...