The effective exterior insulation of a façade described above consists of just two layers: Poroton-WDF plus a lightweight render. In contrast, many commercially available external thermal insulating composite systems (ETICS) consist of a large number of layers. In addition, the problems of “woodpecker damage” or expensive improper ETICS treatment can be eliminated with the solid 15-mm-thick block webs of this new type of thermal insulation façade. Algae growth on the façade and mildewing in the living space is prevented as the structure remains open to vapour diffusion. Moreover, in the event of fire, the thick webs afford somewhat longer protection than rival products. Clay blocks are renowned for their fire resistance and can meet the highest fire protection requirements. Thanks to its stability compared to other systems, Poroton-WDF is a very durable method for upgrading building façades. With regard to investment costs, resistance and durability, it boasts high cost efficiency. 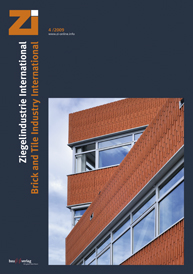 Schlagmann Poroton is complementing its clay brick chimney systems and widening its range of brick-built single-flue chimneys with a chimney with smaller external dimensions. In addition to its...

Perlite-filled clay blocks from Schlagmann Poroton have environmental product declarations from the Institut Bauen und Umwelt (IBU) as well as the eco-label of the eco-Institut in Cologne. In...

Schlagmann Poroton will be presenting their largest-ever assortment of stuffed clay masonry units for energy efficient newbuilds and for the sustainable renovation of old building stock.  ...

Perlite-filled clay blocks from Schlagmann Poroton are virtually free of formaldehyde and volatile organic compounds (VOC). They have environmental product declarations from the Institut Bauen und...

In 1995, with the introduction of Germanys 3rd Thermal Insulation Ordinance (WschV), clay blocks reached the limits of their capability with regard to their thermal insulation properties. The...