Modernization of the control system at Erlus AG

In the accessories unit, the continuous dryer and the cogeneration system were upgraded from S5 to S7 and the Thermoplan process control system integrated.

Both project systems have now been operating for several months to the client’s full satisfaction.

As part of the set-up of a new plant at Creaton AG, at its Wertingen site, a system for testing the dimensional accuracy and sound of the roofing tiles was installed by Thermoplan GmbH.

The system has now operated for ten months to the satisfaction of the plant management, guaranteeing consistently effective sorting. As a result, the labour requirement at the packing station has been halved while the sorting quality maintained.

The special feature of the testing system is the double-testing of the roofing tiles, enabling very sensitive settings for detecting defects (only tiles that have been identified twice as defective are rejected) without the error quota for needlessly rejected tiles being increased.

Thanks to dynamic adjustment of the sorting criteria, factors such as tile weight or tile temperature have no influence on sorting effi­ciency. 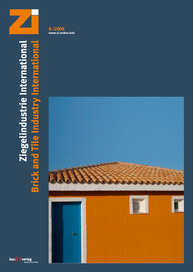 To meet demand for Erlus AGs high-quality roofing tiles, the company has invested in a new production line. Thanks to its expertise in firing and automation, Cleia was selected to realize this...

At Bau, the Braas Rubin 15V clay roofing tile will make its debut. With this model, Braas is widening its range in the segment for small-format roofing tiles. The Rubin 15V enables a regular roof...

Equipceramic S.A. has built a new roofing tile factory with a production capacity of 12 mill. units per year for Smail Bouzeghaya. The factory located in Wilaya de Boumerdes is one of the largest and...

1 Introduction Located in Neufahrn, Lower Bavaria, Erlus AG has a workforce of approximately 500 and counts among Germanys leading producers of tiles and chimney systems. Thanks to the companys...

The Algerian industrial group El Moumtaza, (Bodouaou) has entrusted Equipceramic with a project for the installation of a new clay roofing tile factory producing 14 mill. units per year. The new plant...