In a cross-dredging souring plant, the best mixing effect is achieved by deposit­ing the clay horizontally, in layers as thin as possible across a large area, and then retrieving it vertically with a cross-dredging bucket-chain excavator that cuts through all layers in a single sweep. In order to optimize the mixing and homogenizing effect, different material-store filling patterns have been developed for implementation via the program-controlled filling system. In addition to serving as a blending-bed system for raw-material homo­genization, the typical cross-dredging souring plant also has the following functions: tempering, body moisture equalization, shielding of production from climatic effects, and buffering between preparation and shaping.

Now, cross-dredging souring plants are used not only by roof-tile producers, but in practically all parts of the brick and tile industry and in branches beyond the ceramic­ sector.

The Händle cross-dredging souring plant programme comprises five models defined by their respective bucket size: 30, 45, 60, 75 and 100 litres. The corres­ponding dredging capa­cities range between 45 and 130 m3/h bulk material. All cross-dredging excavators can be sized for basin depths between 6 and 11 m, and the associated excavator traverser fits basin widths of 10 to 30 m. Any arbitrary storage capacity can be implemented. 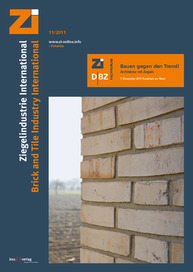 The excavators that ­Händle engineered in cooperation with Petersen, DK-Broager, are now being manufactured by Händle ( www.haendle.com ) alone. In that connection, the entire line of...

With its new longitudinal souring plant, which plays a key part in the production process, Schlagmann Poroton is ensuring higher quality of the finished products. The company has invested  2.6 mill....

In December of 2009, OOO Gazstroy of St. Petersburg and Händle GmbH of Mühl-acker signed a supply and installation agreement concerning a preparation and shaping plant for a brickyard specializing...