Last year in Cyprus, we decided to hold our 2012 General Assembly in Brussels in order to further increase our visibility and to have a greater opportunity to convey our messages to EU decision-makers. Now the programme has been released and registration to the anniversary event is open.

On Tuesday 9 October, the joint meeting of the masonry and roof tile product group will be held. This technical meeting will allow our members to discuss the latest standardization (CEN) and legislative initiatives. A large room has been booked and so on top of our usual experts all TBE members are invited to attend.

The General Assembly will be held in the morning of Wednesday 10 October and will be followed by an architectural tour of the city.

Energy efficiency is high on the EU agenda as the Council, the Parliament and the Commission have started the final phase of negotiations for the Energy Efficiency ­Directive. More so, housing affordability is fast becoming a political issue as ­CECOHDAS, the European Federation of social, cooperative and public housing and other political actors are lobbying hard on the subject. The TBE has published a position paper on the political support required at EU-level for affordable, energy efficient and sustainable buildings. It is available on the website www.tiles-bricks.eu.

The gala dinner will be held amongst the world’s largest dinosaur collection at the Royal Belgian Institute of Natural Sciences. The museum is based on the collection established by Prince Charles Alexander of ­Lorraine, which dates back to the 18th century. 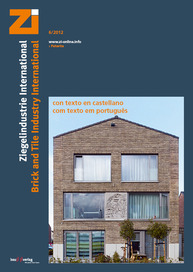 On Tuesday 9 October experts from national associations and companies discussed the latest initiatives on standardization, legislation and other technical issues at the ­combined masonry and roofing...

Dear colleagues, Dear members, As President of the association and CEO of Wienerberger AG, I am pleased to host our 2010 General As-sembly in Vienna on 21 and 22 October. Our annual meeting brings...

This years TBE Annual General Meeting, again in combination with the meeting of the Clay Roofing Tile Product Group, took place at the invitation of the British association (Brick Development...

In 2014, Andil, the Italian tile and brick association, is organizing the TBE annual meeting parallel to its own general assembly. The annual meetings fall at an important juncture as Italy will be...