“At the moment, we’re getting lots of enquiries concerning our technology, especially from European countries, but from Russia and overseas, too. Obviously, the time is right for it,“ said Markus Pichler, the obviously pleased founder and managing partner of Redblocsystems GmbH in Wels, Upper Austria. There, Redblocsystems has been producing prefabricated wall elements from solid building materials since back in 2007.

Pichler explained how growing interest in this type of equipment was being shown primarily by brick manufacturers and building contractors, but added that the company was getting more and more enquiries from investors outside the industry, too. In a somewhat different constellation, he went on to say, Redblocsystems would soon be setting up other plants in Vorarlberg/Austria and in Buchenbeuren near Frankfurt am Main/Germany. A plant for the fabrication of walls from aerated concrete was currently going into operation in Southern Italy, added Pichler. In respect of building types, almost everything could be produced. “We supply mainly prefabricated elements for detached house projects, terraced houses, multi-storey housing, retirement homes, buildings for assisted living, but also for commercial buildings,“ explained Pichler.

Developed together with Sabo

The entire plant was developed together with Sabo; the Greek plant engineering company was responsible for the electronics and programming of the plant up to the interface to the CAD software. Markus Pichler: “In the selection of the components used, we gave Sabo clear specifications, which were met perfectly.” So, only products from renowned international companies, such as SEW, Fanuc, Siemens or Festo, were used. “For the CAD software, we work with Nemetschek-Planbar,” added Pichler.

Digitalization as well as increasing time and price pressure are forcing companies in the building sector to think about time- and resource-saving alternatives to conventional installation processes. Markus Pichler sees one crucial advantage of prefabrication in the consistent quality of the solid walls: “The system always lays the blocks in exactly the same way. Regardless of the temperature, weather conditions, and the employees.“ The advantage of this consistent quality: “There are as good as no complaints on the construction site.”

The prefabricated elements are transported to the construction site, and there put in place easily, quickly and precisely by just a few workers and a crane. A crucial factor for the efficiency and time saving is the patented Redbloc adhesive. This specially developed dry adhesive replaces conventional mortar, bonding the blocks together in a very short time, and eliminating the need for long and weather-dependent drying times. The wall elements can be transported to the construction site and put in place just an hour after they are produced,” explains Pichler.

Redblocsystems’ production lines are available in three models: Redbloc Semiauto, the semi-automatic entry-level model for medium-sized building companies, Redbloc Economic, the extension of the Semiauto line to a fully automatic system, and Redbloc Advanced, the high-end system. All production lines are engineered as turnkey systems and individually adapted to meet customer requirements. Companies that want to produce with Redblocsystems production lines become a licence partner and profit from all further developments, employee training, technical support and consulting.

The high-end Redbloc Advanced system for processing filled building materials offers more advantages alongside those of Redbloc Economic systems. It only needs whole blocks as the system itself fabricates any half-sizes, adapter pieces, and boreholes for the lift-off rods from the whole blocks in a fully automatic process. Moreover, walls without open cut surfaces at the wall ends or for window soffits can be produced. At the sawing station, wall elements can be cut into any shape by means of a diamond wire saw or water-jet system. The water jet system can be used to precision-cut installation ducts, plug sockets, electrical lines or water pipes. 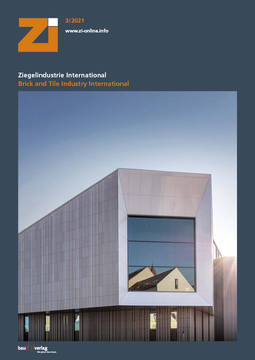 Bavarian clay block manufacturer Schlagmann Poroton has presented amongst others Redbloc prefabricated brick elements and an extensive range of perfect-fit accessories for an economical building shell...

Brick cross on the roof of a housing complex

The brick cross positioned on the roof of the listed housing complex at De-Haen-Platz in Hanover has been custom-built from around 1?100 clinker bricks. Four prefabricated elements were joined...

When is building efficient? An activity is described as efficient when it has been well thought out and is performed effectively and quickly. To build that way, you need the right products. In...

The Unipor Ziegel Group is now supplying slab edge elements as part of a system solution: Consisting of an external brick shell and two highly effective insulating components made of Neopor, they...