With an investment worth over one million euros, Ziegelwerk Klosterbeuren has modernized the wet side of production in its Brick Plant II. The plant control system has also been revamped to optimize the complete process chain in this section – from clay silo to extruder. Only last year the company commissioned a new flue gas purification system.

In a project lasting several months, the up to 25-year-old equipment and machines were first dismantled and replaced with state-of-the-art technology. The wet side of the production has been equipped with the latest robot technology. Two series-connected loading robots each take up up to five green bricks, so that these can be transferred to the drying process faster and more efficiently than before.

“The change in the production flow was one of the preconditions to allow us to produce a new type of clay formwork block. Here, in the robot-controlled process, the necessary recesses are cut in the still wet blocks by a wire”, explains Michael Offner, Technical Manager at Ziegelwerk Klosterbeuren. Overall, with the changeover, Ziegelwerk Klosterbeuren is saving one complete production step.

In the past five years, Ziegelwerk Klosterbeuren has invested over € 10 mill. in new production technologies and energy saving measures. In 2012, the family-run company renewed Plant IV with a highly automated filling and packaging system, last year the flue gas purification system was completely renewed. 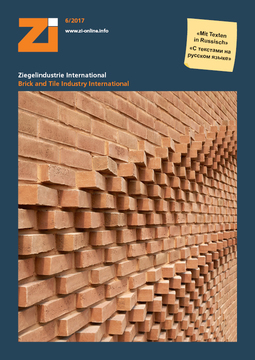 The brickworks Ziegelwerk Klosterbeuren has invested around  1.2 mill. in modernization of the shaping equipment as well as the complete wet and dry sides in Plant I. In the past six years,...

Ziegelwerk Klosterbeuren invests over a million euros in energy conservation

Construction product manu­facturer Ziegelwerk Klosterbeuren has ­received certification according to DIN EN 16001 from TÜV Süd for its energy management system. By altering a number of procedures...

With effect from 1 April, Hörl & Hartmann Ziegel-technik, the Dachau-based company, acquired all company shares in Ziegelwerk Klosterbeuren, a brick manufacturer in Markt Babenhausen. By taking this...

By replacing their 1993 flue-gas cleaning system at plant 2, the Ziegelwerk Klosterbeuren brickworks have optimized their production process. The project had an investment volume of ?1.2?million....

Klosterbeuren Brickworks has extended its existing Plant I, and in a new production facility, it is now producing the MZ 7 and MZ 10 bricks of the My Brickhouse alliance of companies. Investment...