The European Green Deal, uniting the duties of the energy transition and the circular economy, combines the objectives of a climate-neutral and resource-efficient industry with an as low as possible environmental impact. The implementation of the measures requires, among other things, new approaches in resource management as well as the improvement and new development of processes. At present, the high-temperature heat used for the firing of clay materials and green clay bodies, respectively, is provided by burning of fossil fuels. In fact, nearly 100 % of natural gas were used here. The microwave technology could be an interesting method for electrified and energy-efficient firing of bricks. Compared to the conventional heating process, the heat is generated directly by the absorption of microwave radiation in the product.

Literature (Forouzan2020, EUDP2017, DTI2017), however, describes local discolourations and reduction cores due to the microwave-assisted firing. In case of silicate-ceramic materials, the microwave-assisted firing may locally cause a very fast and uncontrolled increase of the temperature to a very high level. This effect is referred to as “thermal runaway” (Xiaofeng2002). » Figure 1 shows the results of a “thermal runaway” illustrated by means of pictures from our own experiments.

In principle, the microwave-assisted firing is based on the dissipation of electromagnetic energy in the material. The frequency f of 915 or 2450 MHz is normally used by the electromagnetic waves. The power P supplied into a material by microwaves is calculated from (Feng2012):

In equation 1 is c a constant, in which the unities of the ­parameters used are included. The electric field strength E entered in the formula is primarily responsible for the spatial distribution of the power input. The dielectric material properties of a product are relevant for the heat generated in it by dissipation of energy, the electric field strength and the frequency of the microwave field as well as the duration of the interaction. The dielectric properties are described by the complex-valued

permittivity. The permittivity is composed of the real part ε‘ and the imaginary part ε‘‘ (dielectric loss). The latter describes the dissipation of electric energy in the system by converting into heat, directly depending on the temperature of the medium as well as the conductivity of the molecules. If gradients of moisture content X and temperature T exist owing to different drying processes or energy inputs, the permittivity also causes a position-dependent energy input. Therefore, the spatially resolved temperature measurement in the specimens is an important step to comprehend processes and to control them in the future.

The aim of the investigations is to capture the temperature profile occurring in the interior of a specimen by means of fibre-optic sensing and measuring technique and, together with the knowledge of dielectric properties at high temperatures, getting a better understanding of the “thermal runaway” in microwave firing.

The tests were carried out with an illite shale for paving bricks. The specimens in a cylindrical shape were cut out of extruded green bodies (at the brickworks). The following specimens were used in the tests:

The PHOENIX BLACK (CEM GmbH, Germany) microwave ­muffle kiln was used for the microwave-assisted firing. The muffle of the PHOENIX-BLACK (» Figure 2, left) consists of a porous quartz glass fibre which can be used up to 1200 °C. The absorber material applied on the inside was removed for the tests so that the muffle was transparent for microwaves. Starting from a furnace temperatures of 100 °C onwards, the muffle is cooled with air from the outside, making sure that the “furnace shell” does not overheat.

Fibre-optic sensors and measuring techniques (Wada2015) are suitable for temperature measurements in microwaves, because the light serves both as transfer medium in the sensor fibre and metric. A disturbance of the metrics by electromagnetic radiation is largely excluded. Special optical glass fibres are used as sensors. Distributed fibre-optic measurement systems have become established in the last few years. These measuring techniques utilize the back scattered light at “defects” and inhomogeneities in the glass fibre itself. The optical glass fibres receive a characteristic reflection signal, whose defined changes in the temperature and force actions are analysed for the ­determination of the temperatures and strains. Special interferometer measuring techniques and defined tuneable laser sources are used for the evaluation of the light scattered back inside the fibre. For measurement tasks with a high spatial resolution in the millimetre range along the entire fibre, the optical frequency range reflectometry together with an evaluation of the Rayleigh portions in the back-scattered light by means of frequency analysis have become established. The sensing technique allows capturing of temperatures almost continuously at high spatial resolution of approx. 0.65 mm through the sensor fibre having a length of up to 20 m (Samiec11). Therefore, this measuring technique is suitable for the measurement of a temperature profile inside the specimen if mechanical changes (strain or shrinkage) are decoupled from the effect of temperature.

The fibre-optic sensors are applied in the cylinder specimens. For this purpose, the cylindrical specimen was positioned centrally in the muffle on a Teflon ring. For measuring the temperature profile in the cylinder, a fibre-optic sensor (single-mode glass fibre of 150 µm in diameter with polyimide coating) was inserted in the bore hole in a stress-relieved manner. The fibre-optic temperature sensor was prepared with connection plugs and terminal ends for the investigations. An OdisiB single-channel frequency domain reflectometer (Luna Tech, USA) was used for the measurement and evaluation of the Rayleigh back-scattered signal in the fibre. In this way, the fibre optic measuring technique serves for spatially resolved temperature capture inside the test specimen within the process.

For validation and analysis of the sensor data, the surface temperatures were measured by means of an infrared camera (IR) of type VarioCam HDx head 620S (Infratec GmbH, Germany) through briefly opening the chamber.

2.3 Measurement of the temperature-dependent permittivity

A coaxial cavity resonator (» Figure 3, left) analogous to Kupfer (Kupfer2011) was used for the determination of the permittivity. This type of resonator allows an exact and reproducible positioning and measurement of larger specimens. The measurement methodology was discussed in literature in detail and widely, with Flesoura et al. (Flesoura2019) and Hofele (Hofele2022), in particular, describing the high temperature measurement.

In the tests conducted, the specimens for the permittivity measurement were heated in an external Nabertherm muffle furnace up to a maturing temperature of approx. 1100 °C. The specimens were removed from the furnace at a gradually set temperature and inserted into the resonator for a few seconds. The resonance curve was measured continuously. The temperature was determined from the part protruding from the tube using an infrared camera PI 400i (Optris GmbH, Germany). The deviations between the measured and actual temperature of the specimens are minimised in the resonator due to the ­temporally fast measurements.

If the variation in the resonance frequency of between 103 °C and 660 °C is considered, this is low. In order to capture the small variation, it was scanned at a dot pitch of 1 MHz. In the temperature range of 800 °C and 925 °C, respectively, the resonance curves change significantly. The resonance curve for 925 °C shown in » Figure 3 is very flat with a large band width, making the evaluation more difficult.

A simultaneous thermal analysis (STA) was carried out allowing specifying the effect of chemical reactions on the permittivity. In addition to a thermogravimetric analysis (TGA), a DSC was carried out to determine the reaction temperature and reaction heat, respectively. The samples for the determination of the thermal behaviour were ground by hand in a mortar to a grain size of < 63 µm. The STA 409 C PC/PG analyser (Erich NETZSCH GmbH & Co. Holding KG) equipped with a DTA/TG sample carrier system was used for the thermographic analysis (DTG). The measurements were performed in a corundum crucible at a temperature range of 25-1050 °C. A preheat rate of 10 K/min was chosen.

For determining the temperature-dependent permittivity, another specimen was heated in the tests and the mass was determined in its cooled down state. The change of mass is compared with the values of the thermographic analysis (TG). Hence, the effect on the permittivity in the heating process can be specified.

» Figure 5 indicates how the regulation temperature at the Phoenix sensor is following the defined linear temperature increase of 733.3 K/h. The measuring point of the fibre-optic sensor on the surface of the specimen (sensor position at 0 mm), hence close by the Phoenix sensor, runs according to the regulation temperature showing minor deviations. The ­temperature drops (after approx. 17 min. at 210 °C and after approx. 28 min. at 340 °C) are caused by opening the chamber for temperature measurements using an IR camera. It becomes clear how the regulation reaches the specified temperature value again by increasing the magnetron power. This leads to a temperature jump in the temporal course of the temperature (» Figure 5) due to a larger energy input. After about one minute of increased power input, the defined temperature has been reached again and the increase is continuing. The temporal temperature profile for the interior of the specimen measured by fibre-optic sensors in » Figure 5, right, clearly demonstrates higher temperatures than measured on the surface of the cylinder specimen.

During the heating process, the material passes various chemical processes. The individual effects can be derived from the DTG curve of the material. The DTG curve (» Figure 8) shows three peaks, i.e. (I) dehydration – physically bound water at 90 - 130 °C; (II) dehydration – interlayer water between 210 - 310 °C and (III) dehydroxylation of the clay minerals between 450 - 750 °C. This does not lead to changes in the structure. The layer structure of the examined specimens remains unchanged. Starting from approx. 800 °C onwards, amorphization of the material takes place. Since various processes overlap, no significant changes in the mass are observed (Schwarz-Tatarin2009).

The functional relationship between the temperature distribution from the fibre-optic measurement and the permittivity of the specimen material allows the calculation of the imaginary part of the permittivity (loss factor). » Figure 9 shows the local ­distribution of the imaginary part ε‘‘ in the z-direction (specimen height). The points in time are identical to those of the temperature profile. The loss factor ε‘‘ varies only slightly over the profile up to the point in time t=15.1 min. Thus, the spatial distribution of the energy input is essentially determined by the electric field. With increasing test duration, an inhomogeneous profile of the loss factor ε‘‘ is formed indicating higher values in the centre. After a process time t=29.85 min., the loss factor ε‘‘ in the centre of the specimen (h = 20 mm ± 8 mm) is significantly larger than 1. Thus, the energy input, being directly proportional to the imaginary part, is increasingly concentrated in centre of the specimen.

On the basis of the sensor-based investigations on the firing of green bodies with microwaves presented in this paper, it can be assumed that a mere microwave-assisted firing of green bodies with a continuous energy input will not work. Phases of energy input should rather alternate with balancing phases and/or exterior heat input for an equalisation of the temperature. Further research is focusing on the implementation of an intermittent process and its influence on the ­physical properties. 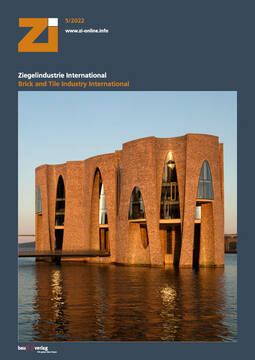 At the Danish Technological Institute (DTI), a project is currently underway to develop microwave-assisted gas firing (MAGF) in the clay brick and tile industry. A MAGF chamber kiln has recently been...

1. Introduction Against the background of the German clay brick and tile industrys goal of greenhouse gas neutrality by the year 2050 [1], in this paper the electrification of the drying process...

1 Challenges for new refractory products A large proportion of all energy consumed in the manufacturing industry goes for heating processes: In 2016, some 1700 PJ (1 PJ = 1015 J) of process heat was...

1 Introduction The objective of drying green bricks is to remove any water necessary for plastic shaping prior to ceramic firing. For this purpose, convection drying is used. Control of the dryer in...