Despite sustained weakness in Creaton‘s field of business, the group was able to increase their revenues for the first eleven months of 2009 to 196.6 mill. €, after 188.4 mill. € for the same period in 2008, and domestic sales were even up disproportionately. Creaton AG Management Board Chairman Alfons Hörmann puts it this way: „Due to surrounding circumstances, however, our profits were anything but satisfactory, especially considering the latest increases in the cost of energy. Creaton intends to keep on optimizing processes and becoming even leaner in 2010. Their main focus is to achieve best-possible capacity utilization.
Creaton expects the roofing market to remain difficult in 2010 but is convinced of being well equipped to handle future challenges. The group‘s financial situation is reportedly still rock solid. Inventories have been markedly reduced, all factories are busy, and a rough sum of 1 million euros was recently invested at the Malsch production facility.
This article appeared in 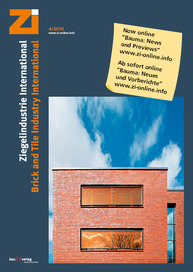 Creaton: An exceptional year 2014 comes to a conciliatory end

The sensational start in 2014 gave Creaton AG an exceptional increase in sales in the first six months. But the boom was followed by a sobering up: the cool down in demand over the second six months...

Long known as a specialist supplier of clay roofing tiles, Creaton AG has broadened its base via strategic reorientation. The company is now emerging as a wide-assortment rooftop expert. The first...

Field-oriented further training from and with Creaton

The clay roofing tile manu­facturer Creaton has established the new Creaton | Campus further training institute for its partners in the roofing trade. The goal is to convey professional know-how...