Over the last three months, representatives from the clay brick and roof tile industry met at their biggest sector events. Around the globe, they discussed the current situation, the problems and the opportunities for our industry, while new machines and equipment were presented at the trade fairs.

Brazil is booming, and the clay brick and tile industry is playing its part in this boom. At the 39th National Meeting of Brazil’s Ceramics Industry from 24 to 27 August, the mood was buoyant among the around 2500 delegates. During the congress organized by Anicer (Association of Brazil’s Ceramics Industry), a successful supporting trade fair was also held. We took our visit as an opportunity to question Anicer President Luis Carlos Barbosa Lima on the situation of the Brazilian clay brick and tile industry and its prospects for the future (page 10).

Tecnargilla 2010 in Rimini took place at end of September, that is just 11 months after the last Ceramitec in Munich. For many exhibitors, this was not enough time to develop new machines and equipment. One focus at the trade fair was therefore the cultivation of client contacts. Many exhibitors expressed their satisfaction at the quality of the trade visitors, but not with the total number of visitors. Most companies would like a cycle that leaves more time between the big European ceramic trade fairs. At Tecnargilla we asked some exhibitors for their views on the two trade fairs and present these from page 18.

Straight after Tecnargilla, at the beginning of October came the next big event in the diary – the Clemson Forum 2010 in den USA. The crisis in the American clay brick and tile industry has not yet been overcome, and that was expressed by the rather subdued mood at the Forum. Since, though, with around 400 delegates, around as many visitors as last year attended the event, the downwards trend could be halted. In the programme of this year’s Clemson Brick Forum, key plant suppliers played the main role and presented their ideas and solutions to up productivity, improve quality and provide impetus for the hoped-for upswing.

On 21 and 22 October, Europe’s clay brick and roofing tile makers met at this year’s TBE Annual Meeting in Vienna. In addition to an overview of the activities of the different product groups, the delegates were given information on current and future-pending activities on EU level that directly affect our industry. We shall report on this in more detail in our December issue.

Yours
Anett Fischer
This article appeared in 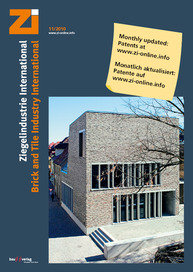 The acceleration of the construction sector is motivating Brazils clay brick and tile industry to grow and improve. This goal brings together all the companies in the sector, even micro and small...

Direxa Engineering LLC (Direxa) based in Lakewood, Colorado/USA, is a plant designer and builder for the clay product industry and other ceramic industries. It is part of the J.C. Steele group of...