Handling moulds is a job performed sometimes several times a day at roofing tile factories. With a weight of at least 30 kg per mould, lifting the moulds “by hand” every time is not possible and not even allowed from a health and safety aspect. When a mould is changed, the mould is removed from the press, lifted into the mould spray-cleaning unit, prepared for casting in the plaster-casting shop and returned to the press – during this process, the mould is lifted, turned and set down several times!

With the FTZ mould gripper, Banke has developed mould lifting gear that is both safe and practical for use. With an easy-to-operate clamping mechanism, accidental opening during handling of the mould is not possible. Moulds weighing up to 80 kg and measuring from around 300 mm to 520 mm in width (extendable to 560 mm) can be gripped and transported. The moulds can be picked up at pre-attached crane suspension bolts or at the installed suspension bushing. The gripper has appropriate mandrils or receiver sleeves for this purpose. Depending on the design of existing working moulds, these can be retrofitted for gripper handling. The gripper is available in two models:

› With short, straight receiver limbs, one mould can be picked up and turned by around 30° in the gripper. This gripper model is very easy to use and suitable for workplaces at which moulds are simply lifted up and set down again

› In the model with longer and angulated receiver limbs, moulds gripped along the axis of their centre of gravity can be turned 360° in the gripper. Particularly in the plaster casting shop this model is useful when moulds are picked up, turned round the axis and set down onto the mother mould. Another possible application is the exchange of working moulds on revolver presses. The moulds are picked up from a bench or support frame and have to be turned to around 60° to be mounted to the inclined drum surface

The mould gripper can be used with standard cranes or manipulators. Banke is happy to test the use of the FTZ mould gripper for various customer applications.
This article appeared in 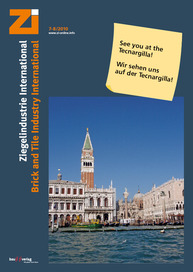 1 Introduction In Central and Northern Europe, most high-quality clay roof tiles are made in plaster moulds. That way, clearly defined ribs and structures can be pressed into the tiles to give the...

Steadily and sustainably, the company has developed over the last 40 years into a full-range supplier for the moulding of clay roofing tiles, investing continually in its own specialized production....

Moulds in plaster or resin? A match-point between quality and convenience

Clay roofing tiles are a traditional building material valued for their durability, elegance, versatility, universality and beauty. For the clay roofing tile manufacturer, it is important, especially...