At the Wienerberger Architecture Symposium 2016 on the topic “Clay Brick as a Building Material. Changing Architecture”, which took place at the Secession in Vienna on 7 April, outstanding examples of clay brick architecture were presented with the austrian brick and roof award 15 | 16. Having assessed the 79 nominations, the high-calibre expert jury chose five winners and presented four recognition awards.

Clay brick as building material stands for tradition and experience, and equally for innovation and progress. With brick, the architectural, construction-related, ecological and economic requirements for a future-oriented construction material can already be met today. “Our austrian brick and roof award for attractive, exciting and versatile brick architecture in Austria is presented every two years. We have now presented the award for the fifth time,” says Norbert Prommer, General Secretary of the Association of Austrian Brickworks (VÖZ) responsible for Austria. “All nine award-winning projects will represent Austria at the international Brick Award 2016,” explains DI Gerhard Koch, VÖZ General Secretary for the Association’s European and international Agendas.

Since the first award was presented in 2007, the number of submissions to this competition has risen steadily and, with 54 submitters and 79 nominations, has set a new record.

The projects were judged by a jury of five experts. “Our jury assessed the submitted projects comprehensively in respect of architectural quality as well as judging how far the respective project has engaged with the potential of brick with all its possibilities – walls, roofs, ceilings and floors, façades, etc. and how the material brick affects the completed building with regard to economic, ecological and design aspects,” reports Mag. Christian Weinhapl, Managing Director at Wienerberger Ziegelindustrie and President of the VÖZ.

Called to submit projects were building owners/developers, architects/planners and builders/contractors. Not only newbuilds were able to take part in the competition: “We accepted any type of building structure – especially additions and architecturally interesting refurbishments. A key condition was, however, the projects should be more recent projects, completed in 2012 or later,” explained Franz Kolnerberger, Director at Tondach Gleinstätten and Vice-President of the VÖZ.

In addition to the five award-winners, the jury gave special recognition to four projects. 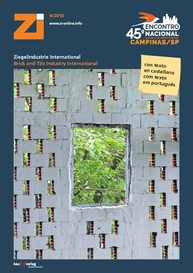 At the Museumsquartier Wien in Vienna last November 10, people from the industry, scientific circles and the training sector, as well as interested architects and media figures, convened in the...