The complete installation was delivered by Ceratec as a turnkey project, i.e. including the layout, the engineering, the soil preparation, the erection of the building itself, the integration of third-party machinery, the conveyor belts and the souring plant filling system, all safety systems, the assembly, the electric control system and the Ceraview supervision software.

ArgiZas is a classic, fully automated brick plant having a nominal output of 150 000 t of hollow bricks per year (B8 – B12 – B16), and is capable of switching to the production of decking blocks. Ceratec also integrated Händle preparation and shaping machines, opted for a fast dryer and built a traditional tunnel kiln. The hollow blocks are automatically stacked in strapped packs with two openings for handling with a forklift, but without pallets.

The complexity of the project comes from its geographical location. The plant is located on a narrow piece of land, situated on a slope. Ceratec suggested altering the classical layout to turn this drawback into a plus. This creative, cost-effective solution was one of the main reasons for the client choosing Ceratec over another supplier. The climate of respect and confidence played an equally important role.

Production started at the beginning of May, and full capacity was reached in early June. During this start-up period no problems have occurred. The resulting bricks are said to be the best available in the region!

The ArgiZas plant is proof of the steadily growing good reputation of Ceratec in Algeria. In the two last years, several projects have been successfully delivered in the region:

Currently, Ceratec is at the preparation stage for three more projects, including Ain Defla (start-up expected in September 2015). 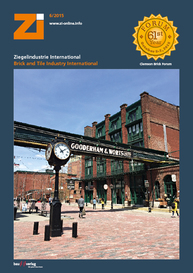 The Federal German Association of the Brick and Tile Industry Regd is holding the 17th International Conference Brickmaking History/Brickmaking Museums from the 5th to 6th June in Havelberg.

Refratechnik Ceramics  formerly Burton  continues to extend its activities on the North African markets. Refratechniks high-quality and durable products have been successfully implemented in...

Plants and machinery for the heavy clay industry

The activities of the Belgian Ceratec group include engineering, manufacturing, installation and commissioning of a wide range of equipment up to integrated plants for the heavy clay ceramics...

Lingl has been able to conclude another contract for the construction of a complete production facility for wall bricks in Algeria. The plant will be located in the region of Médea, 100 km to the...