Direxa Engineering, LLC, an engineering company based in Colorado, USA, and specializing in heat treatment for various industries, and its R&D projects partners Ceritherm and Seipia, both French companies, have combined their skills to develop an innovative concept for a low-consumption tunnel kiln, otherwise named the Skate-Kiln.

The current thermal treatment equipment are becoming outdated. Following the two oil crises and the energy cost increase, the 1980s saw numerous development projects, however, none of these solutions was successful.

Up to now, two major families of kilns are supplied, which are:

The pros and cons of each of these solutions are well known. ­Direxa, Ceritherm, and Seipia have studied the limitations of each kiln.

For the roller kiln, the ledges and the roller’s drives, and thus the supports, are outside of the kiln walls. This presents the following disadvantages: lack of airtightness, heat losses by thermal conduction, limitations in terms of product mass and kiln width, as well as the unreliable product ­tracking.

In the case of tunnel kilns, the main weakness are the kiln cars themselves! A large part of the kiln mass is exposed to the firing cycle and must be considered as part of the total mass to be fired. Depending on the car design, the extra energy consumption can amount to 30 to 50 % of the total kiln consumption. It requires that all the kiln thermal, cooling and ventilation equipment is sized accordingly. The car’s refractory lining has two different functions: insulation and product support. The product support is only possible thanks to dense materials with poor insulating qualities, in contrast with highly efficient insulators that cannot support heavy weight. In many projects, the calculations show a thermal loss of about 1000 W/m2 in steady state conditions at a typical firing temperature. The car, which undergoes the firing cycle, is also limiting for short cycles. The lining, insulation and under frame are subject to thermal stresses leading to deformation and high maintenance costs. To protect the mechanical frame, the under-car is cooled, which in the case of leakage can interfere with the kiln atmosphere. This is the case with the sand seal kiln: the cooling air flowing under the cars partly leaks up to the product load. The air flow is so important that the corresponding thermal loss alone amounts to more than 20 % of the total kiln consumption!

The technologies currently used are well proven. Numerous improvements have been made by the manufacturers over time but the fundamental design and concept have little evolved over the last thirty years. Except for some combustion and process improvements, the additional development possibilities seem limited.

The Skate-Kiln – a different way to move the products

Direxa and Ceritherm have developed a new concept according to which the products are no longer loaded on cars, nor supported by means of mechanisms that go through the kiln walls. This new Skate-Kiln brings a number of advantages:

the same efficient insulation on the four kiln sides (crown, hearth, side walls) as in tunnel kilns

no additional mass to heat and cool, other than the products and their supports

no mechanical part to insulate from the firing temperature.

no limit to the tunnel width

This results in several possibilities for cost savings for the custo­mers:

flexibility in firing cycle: length, type of thermal treatment, possibility of short cycles as the equipment (cars) is no longer a limiting factor

The new concept developed by Direxa and Ceritherm will be presented at ceramitec 2015. 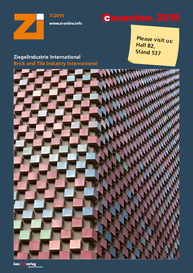 Direxa Engineering, LLC, an engineering company based in Colorado, USA, and specializing in heat treatment for various industries, and its R&D projects partners Ceritherm and Seipia, both French...

Please briefly explain your new concept and operating principle of the kiln! The basic principle of this kiln is that the firing chamber has four fixed sides: two walls, a roof and a bottom...

Kiln cars are a major hindrance to the operation of a tunnel kiln. They are a key source of direct and indirect heat losses and often require extensive maintenance. The realization of these facts has...

Why use radically new kiln concepts  and how?

1 Introduction In the ceramics industry, a tunnel kiln can be simply defined as a continuous furnace where products to be fired and the heating/cooling air travel in opposite directions, as...

 the further development of tunnel kilns for firing clay products has always been and still remains geared to fast firing as a long-term objective - Karsten Junge [13].   1 Introduction Clay...