Along with more than 300 guests, including state and municipal politicians and business partners, the entire Juwö workforce plus past employees celebrated the 150th founding anniversary of the tradition-steeped family enterprise Juwö ­Poroton. In doing so, they made good use of the opportunity to present the new S75 – a clay block with some spectacular characteristics.

Bidding welcome to his many guests, Senior Partner Ernst K. Jungk emphasized that, “Each new generation has always viewed our family enterprise as a mosaic and done their best to expand it in accordance with their own means and times.”

Then, in an amusingly entertaining presentation, General Manager Stefan Jungk illuminated the history and present situation of the brickworks founded in 1862 by his great-great-grandfather Phillip Jungk, the same forebear who established the local fire brigade and served as town major for 17 years. Before that, he had been operating a field clamp between Wöllstein and Badenheim. “Actually”, Stefan Jungk noted with smile, “we have probably been around a little longer than we think, but then again, I would never be able to prove it.”

One of the company‘s major milestones was when Ernst Jungk installed a steam engine in 1899. To keep his employees from having to go on the dole in the wintertime, he kept them busy building houses and apartment buildings. His successor Friedrich Jungk had an artificial drying system erected in 1925 and a three-storey drying hall constructed in 1928. In 1949, the company began rebuilding all it had lost to the destruction of World War II. In 1968, Ernst K. Jungk became one of the first pioneers to obtain a license for producing lightweight Poroton blocks. He served as president of the Poroton Association for 36 years. During that time, Jungk & Sohn evolved into the Juwö brand (with Juwö standing for Jungk in ­Wöllstein). ­Stefan Jungk reported that his father established five new brickworks between 1967 and 2001 – all endowed with the latest technical equipment, of course. Continuing on, he praised his father‘s lifetime achievements, his professional merits and his social commitment. In 1985, for example, Juwö was honoured with Germany‘s Industrial Innovation Award. With state-of-the-art technology and robotic assistance, the ­Wöllstein plant has been producing – and is now exporting to all points of Europe – calibrated clay units since 1995. Stefan Jungk, who joined the company in 1997, called attention to the fact that, “Our innovative approach to products and production is one of the reasons why we are still here to celebrate this jubilee.”  Speaking of innovativeness, he continued on to mention that of the “Mein Ziegelhaus” (my brick house) group. Jungk also expressed his gratitude to all the company‘s “wonderful employees and the great work they are doing”.

Jungk then appealed to the policy makers to improve the tax incentives for the housing sector,  include replacement building projects in the circle of “eligibles” for assistance – instead of promoting only the renovation of existing buildings – and, finally, avoid excessive requirements for building energy performance certification (EnEV). “Good old monolithic type walls with plaster on the inside, stucco on the outside and clay units in between have to be preserved”, Jungk declared as he came out against “living machines with styrene and glass facades”.

On behalf of the state government, Construction and Finance Minister Dr. Karsten Kühl congratulated the company and observed: “A company less well managed would never have stood a chance to celebrate its fifth-generation, 150th founding anniversary.” He further observed that successful companies need to be innovative, market-oriented and staff-supportive. 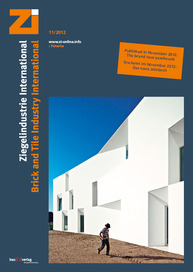 On September 20, 2019, some 180 construction contractors and building material suppliers converged in Warburg-Bonenburg to celebrate Lückings 120th company anniversary. The event started off with...

The 111th anniversary of its founding was celebrated by Ziegel- und Betonwerke August Lücking, a clay brick and concrete manufacturer based in Warburg-Bonenburg, at the end of August with employees...