Lucideon collaborated with Butler Refrigeration to design and commission the construction of a new freeze-thaw test rig. The new rig is capable of testing 16 sets of standard clay roofing tiles, simultaneously. The new rig will not only provide a significant increase in testing capacity but also make Lucideon more flexible. 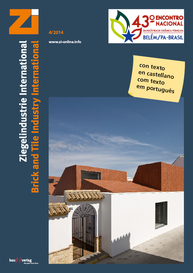 The freeze-thaw durability of clay roofing tiles is a key quality factor in climatic regions in which roofing tiles are exposed to the effects of frost. In the Melch Valley, Switzerland, open-air...

Clay roofing tiles, clay pavers, facing bricks and clinkers have to be freeze/thaw resistant to permanently fulfil their intended structural functions. Frost damage is much-feared, because it can have...

At the 55th Würzburg Brick and Tile Training Course 2017, Keramikinstitut Meissen presented a test for the weather resistance of roofing tile glazes and engobes (leaching test). For the test, boiling...

This paper delves into the mechanisms of action between the physical properties and the frost resistance of structural clay products. By reason of their outdoor application range, such structural clay...