On 9 June 2022, the Brick Award was awarded in Vienna for the tenth time. The winners were presented the following day at a video press conference broadcast online. The internationally recognised architecture prize awarded by Wienerberger honours modern and innovative brick architecture. The prize is awarded in five categories and comes with a prize money totalling € 27,000. One of the winning projects in the five categories receives the Grand Prize as the overall winner.

Grand Prize and two awards for projects in China

The winner of the Grand Prize and awarded in the category “Sharing Public Spaces” is the Jingdezhen Imperial Kiln Museum by Studio Zhu Pei, Architectural Design & Research Institute of Tsinghua University. The museum building consists of eight parabolic brick vaults and refers to the porcelain history of the city of Jingdezhen. The design is inspired by kilns. The cigar shape is derived from the traditional kiln shape. Skylights ­resemble kiln smoke holes. Some of the 2.8 million bricks used in construction also come from demolished kilns.

The Tsingpu Yangzhou Retreat by Neri&Hu Design and Research Office is the winner in the category “Building outside the box”. Based on the typology of Chinese courtyard houses, the almost entirely single-storey hotel complex integrates old existing houses with new buildings. All functional areas are framed by brick walls of partly open, partly closed masonry. Openings in the wall offer views and choreographed vistas. The project draws from the traditional architecture of the region and used recycled old bricks.

Feeling at home in Ecuador

In the “Feeling at home” category, the project The House that Inhabits - Productive Urban Housing in Babahoyo in Ecuador came out on top. The architecture collective Natura Futura takes up the traditional house type of the Latin American city and makes a statement with the visible brickwork. After all, bricks are traditionally associated with poorer conditions and are often hidden by plaster and paint.

European architectural designs prevailed in the other two categories. The Urban Housing project by Avenier Cornejo Architectes on Rue Danton in Pantin, France, prevailed in the “Living together” category. The complex of three buildings arranged in a semicircle houses 88 residential units and a commercial space. The walls are made of hand-formed bricks laid in stretcher bond with hollow joints. The three brick colours respond to the colour of the Grands Moulins de Pantin, built in 1884.

The 2226 Emmenweid project in Switzerland was awarded the prize in the “Working together” category. The name comes from the building services concept, which uses only construction technology to ensure a stable indoor temperature between 22 and 26 degrees Celsius. This is ensured by the wall construction consisting of two layers of bricks, each 36.5 cm thick. From the outside, the four-storey building by Baumschlager Eberle Architekten in Emmenbrücke, Switzerland, stands out with its light-coloured lime plaster and a regular arrangement of the generous windows set deep in the walls.

and one shortlist with

A total of 789 projects from 53 countries were submitted for the Brick Award 2022. A preliminary jury determined a shortlist of 50 projects.

The nominated and winning submissions will be published in the Brick Book “Brick 22”. 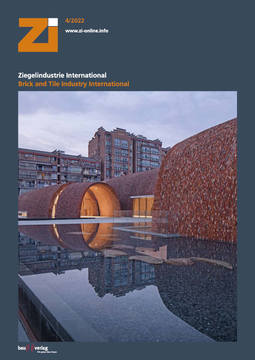 Grand prize winner is a film institute in Thailand

In this project, brick not only serves a decorative purpose, but it is determinative for the whole building structure  a fact I consider particularly important, says Wang Shu, jury member and...

Honouring innovative brick architecture from around the world

The Wienerberger Brick Award has offered a unique platform for the recognition of outstanding brick architecture of international quality since 2004. The use of Wienerberger products is not a...