Limited visibility: a term companies are now using in their annual reports to indicate that it is still hard to predict the future. A glance at the headlines or at a TV newscast suffices to confirm not only that we will be facing some huge challenges in this still-young year 2012, but also that it would be virtually impossible to take a halfway reliable peek at the future – or even the next six months.

To be sure, Germany enjoys a better stance than many other countries at the moment, despite the fact that a mild recession is forecast for the early part of the year. No wonder, considering the country‘s phenomenal growth in GNP last year with its resultant base effect. Even if the economic situation in general should deteriorate somewhat, the housing sector, as the main source of sustenance for the brick and tile industry, probably will not be affected. After more than 15 years of insufficient new construction, there is a substantial backlog of demand out there, particularly in prosperous population centres and college towns. Since the entire construction industry, from building material producers and carriers to scaffolders and construction contractors, has long since scaled back its capacities, that demand-satisfaction gap will be neither easy nor quick to close. Moreover, fear of inflation and the danger of further turbulence surrounding the euro are driving more and more investors into real estate and other material assets. Consequently, despite the prevailing uncertainty, Germany‘s brick and tile industry can be almost sure to find plenty of opportunity to maintain or even slightly expand its revenues in the year 2012.

In the medium term, this run on tangibles might even help other major European countries like Great Britain, France and Italy overcome their current construction crises. Unlike Spain, for example, where the situation appears hopeless, those countries are not having to contend with a huge inventory of abandoned construction sites. In some countries, the still substantial immigration will help them get their respective construction sector back on its feet.

2012 is a jubilee year for Europe‘s brick and tile industry: Our umbrella organization TBE is turning 60, and we would like to call your attention already to a standing invitation for all brick people to attend the TBE Annual General Meeting in Brussels in late September. There, you will find opportunity to contact representatives of the European Parliament and the European Commission and call their attention to specific problems and to the achievements of our branch of industry.

In closing, I wish to express my hope that the year 2012 will turn out to be better than expected. Neurobiologists, namely, have ascertained that exceeded expectations are what truly defines happiness. 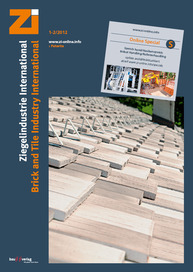 Normally, I would now have been getting you in the right mood for the TBE Congress and the Annual Meeting of the German clay brick and tile industry in Berlin in June 2020. Conference hotel, evening...

Time to think about Christmas already?

Well, it may well be a little early for that. But we should all have already noted down the annual Würzburg Brick and Tile Training Course in our diary. From 3 to 5 December, the German-speaking...

50-year anniversary of the Würzburg Brick and Tile Training Course

As one of the oldest natural-origin building materials made by human hand, the clay brick has a thousands-years-old tradition. The crucial development of the once rudimentary clay brick and tile...