Speaking at the ceremony, Rustam Minnikhanov explained that once the plant had been commissioned, its capacity will reach 60 mill. bricks per year. The President praised clay brick as a modern and high-demand construction material. He thanked the Spanish partners and the investors for their assistance in modernization of the production. Rustam Minnikhanov noted that the new plant had been opened on the eve of Constructor’s Day and congratulated all constructors on their professional holiday.

The Mamadysh plant is the second plant in the Republic of Tatarstan that is fully equipped with Verdés technology. Another famous manufacturer of high quality facing bricks on Verdés equipment - FON plant  in Verkhneuslonsky district of this Republic – is in operation for more than six years. 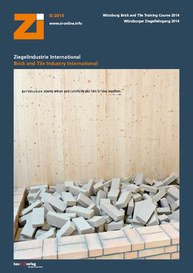 1 Introduction The essence of the brickmaking process has not changed over time. However, modern brick plants are becoming more and more efficient, with larger capacities and with significantly...

Briqueterie Souakri Frères has entrusted Equipceramic with the restructuring of its facilities in Eftah, Algeria. The main problem at this plant, which produces hollow bricks, is the dryer, although...